Throughout history, various cultures and religions were learning about the concept of Karma. This concept is thousands of years old. Besides the great popularity of the concept, it appears that we often misinterpret it. Moreover, it seems as if various ideologies and religions are tossing it around. This is why we cannot understand the true meaning behind it.

The first mention of this concept dates from the ancient Vedic texts around 1000-700 BCE. At that time, the word was without special meaning. For the people, this concept was more like a ritual.

Later on, we trace this word in Upanishads Vedas, early Hindu texts.

The notion of Karma was finally fully developed as we know it today from 400 B.C.E. At that time, it reemerged in other Hindu texts like Mahabharata. After that, it spread across many different religions and philosophical doctrines all over India and all the Asian countries.

Since this notion is dominant across several religions, philosophies, and countries, the meaning can vary slightly. In Hinduism and Buddhism, the meaning of the word is action. It incorporates the things we do, and our actions bring upon unavoidable results. This kind of result may be good or bad, either in this life or after reincarnation. According to the Hindu religion, Karma is one of the means of reaching Brahman.

On the other hand, theosophical scholars consider this concept as a cosmic principle. Karma includes one’s deeds, in which a person receives a reward or punishment in one incarnation. This also means that our past incarnation acts have positive or negative results in the next rebirth.

According to popular culture, the definition of Karma is fate or destiny. It includes good or bad emanations that are believed to be generated by someone or something. For some people, the meaning of the word is very similar to predestination or kismet.

By definition, this is “the force generated by a person’s actions held in Hinduism and Buddhism to perpetuate transmigration. Moreover, in its ethical consequences to determine the nature of the person’s next existence.” In other words, this is about everything you do—each of your activities and work.

There are several ideas (not necessarily words) analogous to Karma. For example, “what goes around comes around, “known in Christianity-influenced Western cultures.

Another one is “midah k’ neged midah “ from Judaism, which translates from Hebrew as “value against value.” Another notion worth mentioning in this section is dharma and adharma. In Buddhism and Hinduism, these are both good and bad Karma, respectively.

Once again, according to the definition, this concept is an action. However, lots of people still confuse this concept. As a result, they often mix karma and results. Often people misuse this concept to signify luck, fate, or destiny. They also misuse it as a way to describe hardships in life.

There is another example: working at the office. This means that your job activity is your karma. And if you do a good job, like helping society or your company grow, you’ll receive a reward. For each action, there’s a matching result.

To take a bribe is another form of karma. This is an action punishable by law. Thus, the penalty is the result of such karma. Therefore, this is not a punishment. 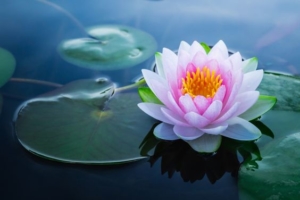 According to this, we can say that all actions are karma and all our actions have results. This also suggests that the result of this concept influences our subsequent actions. Moreover, we can think that she controls our destiny as a whole. Every step that we take brings us to an unavoidable course of life. Life revolves around this concept and its consequences.

Many religions and philosophical schools accept the concept of Karma. This is why there are many different symbols of Karma. Maybe one of the most identifiable symbols is the Buddhist’s Endless Knot (Shrivastava). It’s a geometric diagram representing the nature of reality. Everything is connected and exists as a part of Karmic cause and effect.

In most Asian countries, Lotus is also quite common in depicting Karma. This comes to the fact that when it blooms, it still carries the seeds inside. We view this as the cause, the flower – as an effect. The lotus is a reminder that anyone (and anything) can grow and develop into something pure and beautiful, even in the muddiest conditions.