Its commonly known that Hinduism is one of the oldest, if not the oldest existing religion in this world.  This religion originates from Central Asia and the Indus Valley, and it’s still practiced to this day. The term Hinduism is also recognized as an exonym, which is a name given by others to a people, place, or concept. This term derives from the Persian term Sindus designating those who lived across the Indus River.

Hindu roots and customs that are dating back more than 4,000 years are why this is one of the oldest religions. Nowadays, with around 900 million followers, Hinduism is the third-largest religion right after Christianity and Islam. Approximately 95 percent of the Hindu followers live in India. Because this religion has no specific initiator, it isn’t easy to discover its origins and history. This religion is unique because it’s not a single religion but a compilation of many traditions and philosophies.

According to many scholars, Hinduism started somewhere between 2300 B.C. and 1500 B.C. in the Indus Valley, near modern-day Pakistan. However, there are many Hindus who argue that their faith is timeless and has always existed.

Nothing like other religions, Hinduism has no founder but is instead a blend of various beliefs. In 1500 B.C., the Indo-Aryan people arrived in the Indus Valley, and their language and culture mixed with that of the native people living in the region. There’s some dispute over who influenced who more at that time.

The Period between 1500 B.C. and 500 B.C. became known as the “Vedic Period” since it was the Period when the Vedas were composed. Rituals such as sacrifices and chanting were typically practiced in the Vedic Period. The Epic, Puranic, and Classic Periods happened between 500 B.C. and 500 A.D. At that time, Hindus began to highlight the worship of deities, especially Vishnu, Shiva, and Devi.

In new texts, the concept of dharma was introduced, and other faiths, such as Buddhism and Jainism, increased rapidly.

The Medieval Period of Hinduism is the Period between 500 and 1500 A.D. During this Period, new texts emerged, and poet-saints recorded their spiritual sentiments.

The 7th century was the Period when the Muslim Arabs began invading areas in India. The Muslim Period, lasted from about 1200 to 1757, and during that time, Islamic rulers banned Hindus from worshipping their gods, and some temples were destroyed.

There are two primary symbols linked to Hinduism, the om and the swastika. The word swastika stands for “good fortune” or “being happy” in Sanskrit, which is why this symbol is considered as a good luck charm. The symbol om consists of three Sanskrit letters representing three sounds (a, u, and m). When these sounds are combined, they are considered a sacred sound. This symbol is frequently found at family shrines and in Hindu temples.

Hinduism and Buddhism are very close in their beliefs. Buddhism arose out of Hinduism, and both belief in rebirth, karma, and that a life of dedication and honor is a path to salvation and enlightenment.

However, some key distinctions exist between the two religions. For instance, Buddhism rejects the caste system of Hinduism. Moreover, it does away with the rituals, the priesthood, and the gods that are integral to the Hindu faith.

Hindus worship many gods and goddesses. Brahma is one of them, and it is worshiped as the supreme God force present in all things around us.

Some of the most prominent deities:

Brahma: God is known for the creation of the world and all living things

Vishnu: the God that conserves and defends the universe

Shiva: the God that tears down the universe to reconstruct it

Devi: the goddess that struggles to reinstate dharma

Krishna: the God of sympathy, gentleness, and love

Lakshmi: the goddess of prosperity and purity

Saraswati: the goddess of education

The worship of Hindu people is called “puja,” and typically takes place in the Mandir (temple). People who are followers of Hinduism can visit the Mandir whenever they want that.

These people can also worship at home, which is why many have a special shrine dedicated to certain gods and goddesses.

One very important part of Hindu worship is the giving of offerings. It is commonly practiced to present gifts, such as flowers or oils, to a god or goddess.

Besides, many Hindus take pilgrimages to temples and other sacred sites in India.

Because this is one of the oldest religions, naturally, there are many symbols, gods, and goddesses that people can use in their Hindu tattoos. Below are only some of the most popular choices for Hindu tattoos, but you can always research some more and find the one that works for you.

Lord Vishnu is the principal male figure in Hinduism, occasionally recognized as Narayana or Hari. This deity is considered as a protector and is often portrayed with pale blue skin and four arms and holding objects such as the lotus flower, conch, and discus. In the world of tattoos, he is a popular subject and an influential symbol of safety.

In Hinduism, Lakshmi is worshiped as the goddess of prosperity and purity. She is also the goddess of material and spiritual prosperity. Lakshmi is the wife of Lord Vishnu. In tattoo designs, she is often depicted with four arms, sitting or standing on a large lotus flower.

This is the Hindu goddess of time, creation, ruin, and power. She fights against evil and stands as a divine protector. In tattoo designs, she is often depicted standing over her companion Shiva. Moreover, she is often designed with a blue face and a long, sharp tongue.

In Hindu culture, Ganesha is one of the most popular and widely worshiped deities. He’s got the elephant head and a human body. Ganesha is the God of new beginnings, who can also help you overcome difficulties. People chose him for their tattoo design because they want to symbolize a fresh start or as a symbol of good fortune.

In Hinduisms, Nandi is the bull that Lord Shiva used as his mount. His name stands for happiness or joy, and many believe that his image will bring good luck and satisfaction. Nandi is half-bull and half-man.  Even though this is not the most popular Hindu tattoo design, full-color renditions of him can look truly amazing. 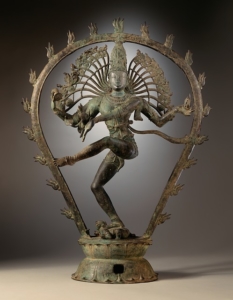 In Hinduism, Krishna is the supreme deity who also happens to be the complete recreation of Lord Vishnu. In this religion, Krishna is one of the most popular figures. As a tattoo design, Krishna is represented as a young child or man with black or blue skin wearing a yellow dhoti and a peacock feather crown. He has many qualities, such as diplomacy, playfulness, and fearlessness. This is exactly why Krishna is usually included in tattoo designs.

Krishna is often playing the flute, and this image is often combined with a peacock feather, making a popular tattoo that also represents Krishna.

Rama is a popular god known for his incredible compassion for others, his bravery, and his devotion to his religious duties. With his two arms and a blue body, usually holding a longbow and arrow, he is a symbol of virtue and good governance.

Saraswati is the female goddess with four arms, often playing the veena. The veena is a plucked string instrument from ancient India. She is dressed in white and gold. Saraswati often sits on top of a swan or a lotus. She is a perfect subject for people who love art and tattoos, as she is the goddess of learning, music, and art.

As previously said, this is a sacred word and symbol in Hinduism. This symbol stands for the Supreme Being, the soul, understanding of the universe, and knowledge. This symbol is very popular in tattoo designs, even among non-believers. Most often, this symbol is tattooed in solid black, red, or blue.

This flower grows from the mud. In Hinduism, the lotus is a holly flower that is related to divine beauty, purity, and enlightenment. It is known that flowers in different colors have different meanings. However, in tattoos, the popular shades are pink, pale purple, and light orange.

Hindu tattoos are done by using different techniques. For instance, the Old school tattoo style is quite popular for Hindu tattoos. This style features bold outlines and simple colors. Another popular style is the watercolor style, and Hindu tattoos inked in this style look fantastic, especially for when representing the gods.

Sometimes, black and grey Hindu tattoos are inked with white lines to give the tattoo a three-dimensional look. By doing that, the tattoo is popping off the skin.

Very often, Hindu tattoos are inked in black and white or black and grey. However, there are a lot of people who prefer to have them in color. These shades are typically quite stunning and largely incorporate colors like bright blue and purple as well as complementary combinations of electric pink, green, sunflower yellow, and orange.

Like with any other tattoo design, the placement of the Hindu tattoos is really important and depends on the choice of the tattoo. If you are interested in a small Hindu style tattoo, you should probably choose a lotus or Om symbol. Tattoo designs that include the Hindu gods and goddesses always look better when tattooed on a larger space, and most tattoo enthusiasts choose their upper arms, back, shoulders, and chests for their tattoos. Another commonplace for Hindu tattoos is the hands. These designs will typically incorporate the Om symbol of Ganesha.

After everything said before, we are free to say that Hindu tattoos are chosen for a variety of reasons. They are a common choice for those who practice religion. These people wish to keep the iconography close to their hearts and showcase their beliefs. People who do not practice this religion also choose Hindu tattoos. This is because these people still appreciate the subject matter. No matter what your story is for getting a Hindu tattoo, these designs are truly exceptional. The important part that you should know is finding the perfect Hindu design that is meaningful to you and the perfect way to ink it on your skin.