Irish people believe in things like clovers, shamrocks, and leprechauns. This is deeply rooted in Celtic beliefs and tradition. The usual color theme that they pick out for the shamrock and clover is different shades of brown and green. For people of Celtic and Irish origin, green is a color that is pretty 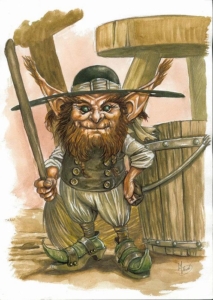 significant. You can adapt these tattoo designs to many sizes, making it easy to tattoo them on any body part. Although not many people get a leprechaun tattoo design, it is still something that some people prefer in their tattoo art.

In this article, we are going to talk about leprechauns, what are they, and how are they used in tattoos. Continue reading and see whether this tattoo corresponds to you and your personality or not.

Leprechauns are impish little characters of Irish origin. They are a type of fairy of the Aos Si in Irish folklore. Usually, they are depicted as little bearded men, wearing a coat and hat, who partake in mischief. They are solitary creatures who are spending their time making and mending shoes. They also have a hidden pot of gold at the end of the rainbow.

Just like other Irish fairies, leprechauns are probably derived from the Tuatha De Danann. Leprechaun-like creatures rarely appear in the mythology of Ireland, and only became prominent in later folklore.

Even though their occupation is shoemakers, they are most famous for the hidden pot of gold. If others can locate them by their hammering and capture them, they may reveal the location of their hoard. However, they are usually tricky and feisty enough to elude their captor, who has only to look away for a moment.

The name leprechaun comes from the Irish word leipreachán that Patrick Dinneen derived as “a sprite, pigmy, or leprechaun.” The earliest known reference to this creature appeared in the medieval tale called Adventure of Fergus, son of Leti. The text contains an episode in which Fergus falls asleep on the beach and wakes to find himself being dragged into the sea by three leprechauns. He captures his abductors, who actually grant him three wishes in order to release him.

Leprechauns are solitary creatures. Also, they enjoy telling practical jokes. The great wealth of these fairies comes from the “treasure-crocks, buried of old in war-time.” They have them uncovered and appropriated.

Leprechauns were fascinating characters of lore and legend since long ago. Usually, tattoos of leprechauns depict them as fun-loving and harmless little creatures, holding a beer in their hand and smoking a pipe with some tasty tobacco in it.

A leprechaun with red hair, coated hat, green coat, and a pipe, is the symbol for people of Irish descent. People of Irish origin usually prefer the original image of the creature used in a tattoo design.

It is also not unusual to see a leprechaun in pair with other Irish symbols like the shamrock. In 1964, Ted Drake created this famous example, using it in the logo of Notre Dame University. The home of the “Fighting Irish” adopted it in 1965.

We already said that you could design these tattoos in many different ways. Some of them can include a lot of Celtic elements and symbols. For centuries, the leprechaun is a symbolic symbol of the Irish. Leprechaun tattoo designs may include clovers, beer, shamrock, and other Irish symbols.

This folklore legend is famous all over the world. The legend tells us that if we find a leprechaun, they will pay us great wealth to be set free. Nowadays, the leprechaun symbolizes the Irish culture, St. Patrick’s Day, and good luck as well. Even after this long period, the legend of the leprechaun still lives.

The symbolism and meanings of this tattoo design can be both positive and negative. This tattoo design holds symbolic value to both men and women that wear such kind of tattoos. The leprechaun tattoo can represent both bad and good.

The most common meanings of the leprechaun tattoo design are the following:

When it comes to leprechaun tattoo designs, they appear in many varieties. One popular tattoo design is the evil one. The evil tattoo design portrays the leprechaun as an evil character or with an evil personality. With this tattoo, you can describe a lot of different things.

Another popular design is the drunken leprechaun. As we all know, leprechauns love their beer. Many such tattoo designs are going to portray this motif with a mug of beer. With this tattoo design, the leprechaun usually does mischievous acts like flipping the bird or showing his rear.

Another favorite design among tattoo lovers is the lucky leprechaun tattoo design. This tattoo usually symbolizes good luck and fortune. This tattoo design often portrays the creature with a four-leaf clover, a pot of gold, or rainbow.

There are many different leprechaun tattoo designs you can choose from. Choose wisely, and remember to always research for the meaning and symbolism of your tattoo.