Playing cards can represent the love and passion of a person towards gambling, and they are a symbol of some other things like fate and good luck. They make some excellent tattoo designs and can come in different styles and sizes.

The playing cards which are used in tattoo imagery are generally either the ace or one of the face cards, for instance, the king of hearts, or the king, queen, or jack or any suit. Most of the time, they are shown in “winning” combinations like four aces, a royal flush, or a sum of twenty-one. As such, they can be considered the symbol of good luck and also fate. 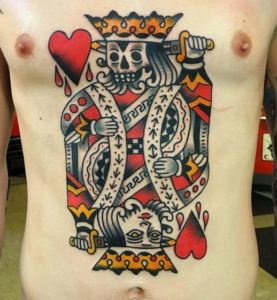 Card tattoos are quite popular among professional card players, as well as among anyone else that enjoys games and gambling. As you can do a lot of different things with them, it is easy to see why they are a famous tattoo choice among tattoo lovers.

There are a few different ways that card tattoos can be designed. One interesting thing is using the symbol of each suit: the spade, heart, club, and diamond.

Card tattoos usually include some other tattoo symbols which are connected with a specific card. There are a few different symbols that are placed within the actual cards. Here, we have a list of those symbols. They are stars, money, poker chips, cherries, eight ball, crowns, horseshoes, roses, dice, as well as flames and skulls.

Remember – before you choose to get a tattoo of playing cards, you have to make sure you understand how they work. In the traditional deck, you have 52 cards. You have 54, which include two Joker cards, but they are not commonly used in most of the games with cards. Each card in the deck belongs to a four-card set: Ace, King, Queen, Jack, 10, 9, 8, 7, 6, 5, 4, 3, and 2. Each card in the set belongs to one of four suits, which we already mentioned: the hearts, diamonds, spades, and clubs.