As tattoo designs and symbols, the clover and shamrock are very popular among the Celtic and Irish descent. The clover is sometimes considered to be synonymous with the shamrock, even though these two are not the same thing.

Clover is one of a group of plants – Trifolium – which are generally three-leafed. Originally, the properties of the plants, like being full of life and robust, came to be connected with living well as well as prosperous life.

The clover was also planted on graves, probably referring to a new life after death or resurrection. The thing that the clover has been connected with luck is the result of the four-leaf clover as of its rarity. Thus, a good luck tattoo will be a four-leaf clover. 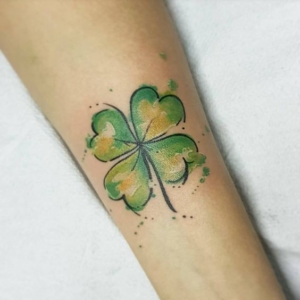 The four-leaf clover is a rare variation of the common three-leaf clover. According to traditional superstition, such clovers bring good luck, although it is still not clear how and when that superstition started. The earliest mentioning of the four-leaf clover was from 1640, and it was simply said that it was kept in gardens as of being good for the purples in children and other individuals. Another description from 1869 also said that the four-leaf clovers were gathered during the night time, during the Full Moon by sorceresses, mixed with some other ingredients, while young girls were in search of a token of perfect happiness made a quest of the plant by day.

It was claimed that there are almost 10,000 three-leaf clovers for every four-leaf clover. However, one survey of over 5 million clovers has found that the real frequency to be closer to 5,000 to 1, double from the said probability from previously.

Clovers can have more than four leaves. There are the five-leaf clovers that are less commonly found naturally than the four-leaf ones, but they were also successfully cultivated.

The clover is also known as a shamrock, originating from Ireland and it is a national symbol of the nation.

A four-leaf clover tattoo is one of the top designs in the tattoo tradition and art. It is a tattoo that comes with elegance, and it originates from a lot of years ago. It has a specific meaning, and it is often applied by both men and women.

This is a plant that was used to symbolize the Holy Trinity, the Father, the Son, and the Holy Spirit. Because of that, the leaf was a national symbol of Ireland. Nonetheless, the four-leaf clover has been found in the rolling hills in Ireland, which spread later worldwide. A person that found it is considered a lucky one.

The tattoo symbol was commonly utilized to symbolize and represent good luck. This was the original symbolism and meaning of the plant, as it was rare to find it. However, as we already mentioned, there is still no evidence why is that so. It is believed that you could find the leaf out of ten thousand clovers. A lot of people also connect it with good fortune and luck.

This is why the four-leaf clover became more popular, as a result of its rarity.

The rarity of the four-leaf clover gave it an interesting name – the Luck of the Irish. It was frequently grown in Ireland, and it was scarce in growth.

The mystique of this four-leaf clover continues even today, as finding that the real thing can be a very rare occurrence and an enduring omen of good luck. Generally, a true four-leaf clover is going to have one leaf slightly smaller than the other three. One of the interesting attractions of this plant is the memories which it conjures up for most of the people for those hours spent looking in the gardens and the grass fields for some luck.

Some people are going to apply it simply because of the beauty part that it has. This is a very elegant type of tattoo design, and also, it is quite a unique one. For example, you can add some colors to it to make it more attractive and beautiful, or it can be applied basically with the other details. The general design of the tattoo can vary, which will satisfy the main meaning of your tattoo.

On the other hand, when it is applied with some symbols such as skulls or other cult-based symbols, the meaning could be quite negative. All in all, this tattoo design is often chosen to show that the person has some sense of fortune and luck.