When the greatest fans of the Star Wars series decide to show appreciation, they do different things. For instance, some of them might decide to buy Star Wars apparel. Others choose to buy all of the Star Wars movies. However, only those die-hard fans decide to get tattoos. One of the top choices among these tattoos is the lightsaber tattoo.

What is the Lightsaber

The lightsaber was primarily used by the Sith or Jedi and represented a weapon that is also known as a laser sword. The kyber crystal is what gives power to the lightsabers and emits a plasma blade. This weapon can be turned on and off at will, and it’s easily concealable. No one could use these weapons because it takes a great deal of training to master the weapon. This weapon becomes notably more powerful in the case when Force used it. Besides the fact that the Sith are competent to use this weapon, it is usually likened to be a Jedi weapon.

This weapon is not only used to harm, but at the same time, it is also used as a defense tool. There are a lot of cases when both the Jedi and Sith use this weapon to redirect shots from blasters. There aren’t many materials that can avoid a strike that comes from a lightsaber. It will cut through almost anything, and therefore it is such a powerful device.

How the Lightsaber Works

This weapon had a hilt of that was typically made of metal. However, it is also known that these sword hilts were also being made out of the wood of the Brylark tree, which was just as powerful. The power pulled by the lightsaber comes from a power cell in the hilt. The most critical parts, crucial in its creation, were an emitter matrix, emitter shroud, and some kind of switch that was used to turn the lightsaber on and off.

Variations of the Lightsaber

The Star Wars series include several variations of the lightsaber. All of these variations can be used as lightsaber tattoos. Everything depends on the personal preference of the person who is getting this tattoo.

The first and most important is the standard lightsaber. This is the kind of weapon that both Luke Skywalker and Darth Vader used. It has a straight hilt but can be modified by the Jedi or Sith using it.

Another one is the double-bladed sword. Darth Maul used this variation of the weapon. It is different from the previous because it has a hilt with a plasma blade that emitted from both ends. Moreover, its grip was much longer than that of the standard lightsaber. Most often, these lightsabers would include two standard lightsabers linked in the middle. 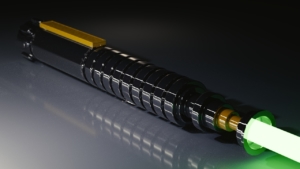 The Grand Inquisitor owned another variation or a double-bladed spinning lightsaber. This lightsaber was almost like the saber staff since it emitted plasma blades out of both ends. The only difference was that the grip was as long as the standard lightsaber, which made this easier to spin.

Kylo Ren used the cross guard variation of the lightsaber. This version is similar in look with the standard lightsaber with the only difference in the two short plasma blades that release perpendicular to the main blade.

Darth Tyranus is the owner of the curved-hilt lightsaber, another known as the canon. The name is expressive of the hilt of this weapon. This sword design had a curve in the grip, allowing it to aid in better one-handed fighting.

There were also variations of blasters and lightsabers. The creation of weapons such as the lightsaber pistol and the lightsaber rifle had the purpose of giving the fighters the ability to fight in close quarters while at the same time being able to fire at the enemy from a distance.

With everything being said previously, we can conclude that the history of the lightsaber is deep and intensive. This is the chief reason why there are a considerable number of fans of the Star Wars series who love it that much to wear such a tattoo on their skin. The fact that there is never a lack of information that you can find is what prevents new generations of fans from losing interest. This weapon is something that will forever remain as a staple to the Star Wars franchise, and it’s pretty obvious why people would like to have the lightsaber tattoo. If you decide to get this kind of tattoo, you should know that you are free to include whatever you want that is associated with the series and, at the same time, is meaningful to you.