For those people that love the water and seas and sea world, in general, a lobster tattoo design will be an excellent choice. Those people who are born near the ocean have an authentic affinity to the sea, and also to the life forms connected with it. The lobster tattoo is not just meaningful, but the lobster itself has many authentic features. That makes it a very nice piece of art when done precisely and well. 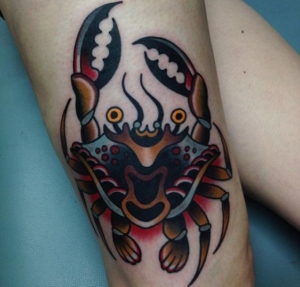 Lobsters are the family of large marine crustaceans, called Nephropidae, sometimes Homaridae. The lobster has a long body with a muscular tail and lives in crevices or burrows on the seafloor. Three of its five pairs of legs have claws, including the first pair. The legs with claws are usually much larger than the others.

Lobsters are highly prized as seafood, and they are also economically important. Usually, they are one of the most profitable commodities in coastal areas they populate. The two commercially significant species are Homarus from the northern Atlantic Ocean and scampi from the Northern Hemisphere genus Nephrops and the Southern Hemisphere genus Metanephrops.

A few groups of crustaceans contain the word “lobster” in their names. However, this unqualified term generally refers to the clawed lobsters of the family Nephropidae. The clawed lobsters aren’t closely connected to spiny lobsters or the slipper lobsters, which are without claws. They are also not connected with the squat lobsters. The closest living relatives of these lobsters are the reef lobsters, together with the three families of freshwater crayfish.

Generally, when lobsters find their use as tattoo imagery, they are part of the large symbolism of ocean life, as well as sea creatures. Usually, they appear to be on the attack, with the large front pincers open. As they scavenge dead carcasses for food, they represent the forces of regeneration.

In Chinese art, for instance, they sometimes find their use as the feet of Kuan-Jin. Here, they symbolize harmony and wealth. Most tattoo designs show the lobster as red – a color that doesn’t occur for the lobster naturally. When alive, they are often blue-green in color. Their shell turns bright red only when we cook them.

Some of the most common symbolic meanings related to this tattoo design are:

Lobsters are the scavengers of the sea, and they symbolize similar qualities for human beings. Also, water is the overpowering element in which lobsters spend their lives. Water, as an element, has great symbolism and meaning for different cultures in the world. There is no life without water, so imagine how symbolic water is for every one of us.

The lobster tattoo can also symbolize our deep feelings or emotions which has the water to clean and heal. This is because the lobster makes the most profound of the waters its home. By tattooing a lobster on your skin, you are trying to delve into your most profound emotions. In those emotions, the pressure is at a maximum and is hard to endure as well.

The lobster is the symbol of your inner emotional self. Your emotions can create immense pressure on your mind. This can crush you emotionally. However, the lobster’s outer hard shell symbolizes protection and strength. This will help you to defend yourself against the crushing pressure. It will also relieve you of a lot of pain in your life.

Some of the most common designs and variations of lobster tattoos are the following:

Most of the lobster tattoos existing are colorful, often red and blue. This is something unusual, as black ink is the most popular one in the tattooing world. However, regardless of your love for black ink, you will also love the colorful lobster’s tattoo pretty well.

When using this color, you can view the details of every part of the body of the lobster. That is why this is another common tattoo variation among tattoo lovers. However, using this color will not always be easy, as the artist may find it hard to accomplish what you want.

Lobster tattoos are definitely more desirable in regions in which lobsters for part of the culture. That being said, the cool and amazing look of this creature makes it an excellent option for people who want to have something more unique, different and amazing on their bodies.

Just like with all tattoo designs, you should know what you want. Take into consideration the design and the color of the design, as this plays a great part in the final result. Moreover, this plays a huge role in the quality of the tattoo you are going to get.