There are people who choose and get some tattoos just simply because they see the design or symbol and fall in love with it. Others search for images and symbols which have a more profound meaning. 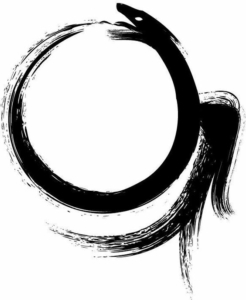 The use of ancient symbols in tattoo art is a very common thing nowadays. There are a lot of ancient symbols that find their purpose in tattoos and have significant meanings and symbolism. Moreover, those symbols are of great importance for many people who want to honor their ancestors and the way they were living.

One ancient symbol which is quite present in the world of tattoos is the ouroboros or Uroboros. Ouroboros is actually an ancient symbol that depicts a serpent or dragon eating its tail. Originating in ancient Egyptian iconography, the snake eating its tail entered western tradition via the Greek magical tradition. It was also adopted as the symbol in Gnosticism and Hermeticism, and most notably in alchemy. The term ouroboros derives from an ancient Greek word, and it means oura – tail, and bora – food.

Below, we are going to talk about the use of ouroboros in tattoos and the meanings and symbolism that it has.

The first even known appearance of the ouroboros motif is in the Enigmatic Book of the Netherworld. This is an ancient Egyptian funerary text in KV62, the tomb of Tutankhamun, during the 14th century BC. This text concerns the actions of the god Ra and his union with Osiris in the underworld.

The ouroboros is depicted two times on the figure: holding their tails in their mouths, one of them encircling the head and the upper chest, and the other surrounding the feet of a large figure that may represent the unified Ra-Osiris. Both of the serpents are the manifestations of the deity called Mehen. In other funerary texts, the deity Mehen protects Ra in his underworld journey. The whole divine figure represents the start and the end of time.

The ouroboros also appears elsewhere in Egyptian sources. There, just like other Egyptian serpent deities, it represents the formless disorder that surrounds the orderly world. Also, it is involved in the periodic renewal of the world. The symbol also persisted in Egypt into Roman times. In those times, it frequently appeared on magical talismans, sometimes combined with some other magical emblems.

The 4th-century AD Latin commentator Servius was also aware of the Egyptian use of this symbol. He noted that the image of a snake biting its tail represents the cyclical nature of the year.

The snake, which eats its tail, is the ultimate symbol of self-devoured, as well as of constant, eternal, and cyclic rebirth. Just like the circle itself, it is continuity and that unity of opposite meanings, which may be very powerful in symbolism.

Known all over the world‘s iconography from the Aztecs to the alchemists of Europe, the ouroboros is quite popular and extensively utilized in tattoo art. Just like with all other personalized symbols in tattoos, it isn’t unusual to see this serpent done in styles of a lot of different cultures and to see variations on its theme. One such design is the ouroboros, given a single twist to transform itself into a symbol of infinity.

For those people that already decided that they want to have this tattoo design on their skin, we offer great information in our article, which is going to help them create a unique picture. The ouroboros tattoo is one of those designs which not just look remarkable but are also packed with ancient importance.

Those people who choose these tattoo designs are aware of what do they symbolize. People may get an ouroboros tattoo to remind them that they can always start over and make new beginnings. Moreover, it may be utilized to symbolizes the duality of life and how all the universe is cyclic, continuing, or infinitely.

Some of the most common meanings associated with ouroboros tattoos are:

Ouroboros tattoos are definitely suitable for those of you who love ancient symbols and profound and meaningful tattoo designs.