Home
Tattoo Meanings
Meaning Of Aztec Sun In The Tattoo Art : “The Belief In Afterlife”

According to the Aztec people and their beliefs, the universe and all the things around us were formed in different cosmic eras. They believed that the four suns were created in four previous ages, as well as that each of those suns had died at the end of its era.

The fifth sun was known as Tonatiuh, and the present era is still his. His name actually meant “He Goes Forth Shining,” as he was also the first moving sun. Tonatiuh had the responsibility to support the universe, and therefore his weakness could bring the end of the world. 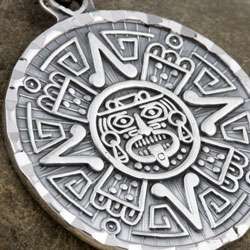 There were also human sacrifices often offered to him, so that it will nourish him, as well as maintain his strength. Tonatiuh was the main one responsible for the Aztec heaven which was called Tollan, where only dead warriors, as well as women that died in childbirth, could enter.

There are literally a lot of different styles of tattoos out there, and this can make it quite hard when trying to choose what the right one for us is. This is particularly the case with tattoos because we certainly get them with the intention ‘that they will last a lifetime.’

When we talk about traditional art forms, there are not too many more ancient than that of the Aztec art, which is quite diverse. However, there are often common influences within art like people, gods, animals, nature, as well as geometrical shapes and patterns. It is very common for these shapes, patterns, and symbols that motivate people to the idea of tattooing an Aztec tattoo.

The Sun in Aztec terms represents the world together with all of its inhabitants – a world which was believed to last 52 years. An Aztec sun tattoo was created in honor of the Aztec sun-god called Huitzilopochtli. What actually symbolized the sun-god was a left-handed hummingbird. The sun-god was the most important god of the Aztecs because he was believed to be the guardian of heaven. The sun was considered the guarantee of the afterlife, because of its constant rising and setting. Because of that, the meaning of the Aztec sun tattoo is ‘belief in the afterlife.’ Also, it was made to show adoration for the sun-god.