Parallel lines are two lines with a degree of space between them. Both of these lines on the top and bottom go in a straight line. These two lines never cross. They go alongside each other forever. They never stop the direction they are heading unless a point in the lines diminishes them. Parallel lines can run in any direction, horizontal, vertical, and diagonal. Once again, as long as the two lines do not cross, they are considered parallel lines. 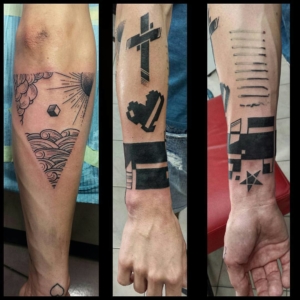 The tattoo concept of a parallel line can mean many different things. The person with the tattoo, or wanting the tattoo, definitely has some meaning behind it. As these are geometric lines, one can only guess the symbolism behind them. Below are some examples of how people used these lines in a creative and respectable tattoo.

The parallel line tattoo is very popular in recent times. Not many people understand that such a simple design can go a long way. There are many different ways to portray these lines. You can get a wrap-around armband, just two lines making an equal sign, or add a third line on the armband.

One of the most popular wraps around tattoos is the parallel lines, boldly tattooed on the forearm. These lines can either be thick lines or thinner, depending on what you want. If you like this tattoo, you should adjust the size depending on how big your arms are. The forearm is not the only place to ink these two bold lines. You can also put them on the upper arm. This tattoo is also a great way to end a particular theme you have as a sleeve. Coloring these tattoos is an option, but keeping them bold and black always looks great.

This tattoo design gives the effect of one line being bigger than the other. If you make either the top or bottom line thicker, you reveal that although parallel lines, they are not the same. Whether you color these tattoos with a bold black ink or not depends on you. You can also get designs within these parallel lines or even fill in the gap between the two lines. In this way, you give a unique touch to your tattoo.

Also, stars and other cosmic illustrations can represent a parallel universe between those two parallel lines. This tattoo can start somewhere near the middle of the top of your arm. The thicker line can be on the larger part of your arm and the thin line on the bottom. This is where the arm starts to get thinner near the elbow. This design also looks impressive on the calf and lower part of the leg below the knee.

If you ink the parallel lines around the wrist as a wristband, you give the effect of always wearing a bracelet. Some people feel as if they are naked without something wrapped around their wrists. If you are one of these characters, this tattoo is ideal for you. It not only looks superior, but it can be designed in multiple ways.

Just like we already said, you can turn these lines in the way you want, as long as they are parallel—for instance, one thick line and the other thinner. You can even fill in one line with bold black ink and keep the other one transparent. By doing this, you turn the lines into bar-like shapes. The leg is also another option if you want a less noticeable tattoo. This is also a cool tattoo if you want something small and simple.

Another exciting concept is a tattoo with three lines, parallel to each other. This kind of tattoo does not require a more special place than the classic two-lined tattoo. These three lines do not have to be thin. However, the simplistic look of three lines wrapping around the arm says enough.

As simple as it is, there is always a chance of mistake. It would be best to make sure that the artist has lined up the lines to your liking. They need to be as smooth and solid as possible, so there are no awkward waves or uneven gapping.