The geometric shape is any shape that has many symmetrical sides and is a figure that can be described by mathematics and numbers. These are commonly seen shapes that often fit together to make a geometrical pattern. Because these designs are made of a repetitious manner, they are a symbol of constancy, stability, and accuracy. Any image, symbol, or picture can be included in a geometric design. The image can be reduced to simple shapes to fragment it and remake the image in its purest form.

Geometric tattoo designs are those designs that turn a picture, frequently that of animals or portraits, into its simplest shapes so that any complex design becomes simple and more easily understood. The most straightforward geometric shape design is flat and lacks dimension. This is a representation of the deconstruction of the world around us. Moreover, it means that the individual regards the world in the simplest terms, rather than overthinking, overanalyzing, or overcomplicating life and nature. 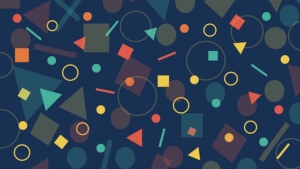 People around the globe have a considerable interest in geometric shape patterns. The connection with science, technology, and math is the reason why this style of tattooing seems much more updated. This style represents many ideas that are as old as math and science and cause people who are fans of standard science to often choose them for their tattoo designs. Additionally, fans of art and how the angles form these pieces of work are frequently fans of the geometric tattoo. The symbolism of the geometric tattoo lives in the image.

When it comes to the look of the geometric tattoo, negative space can play a huge role. Only an artist who possesses a solid understanding of geometric shapes can make a design that will be lasting and unique enough to make the owner proud for a long time. One possibility to finish a geometric design is to ink the 3D object on a flat surface rather than on curved surfaces of the body.

Predatory animals like wolves or birds of prey can easily be turned into a geometric design and signify the predator in humanity, the top of the food chain. Because of how simple these designs are, they are often kept black and white, but to brighten the image and color can be included. To add vibrancy to any image, watercolor-style paint strokes might be added in the background. There are some geometric designs with no contour or black lines but only blocks and shapes of color that are used to make an eye-catching tattoo. The color is the central element in this tattoo and may be chosen because of the eye-catching way to present a rainbow of hues.

To create a complicated tattoo with shadow and dimension, geometric designs can be done with depth and detail as well. These designs often rely on strict shapes and lines to make a striking image that tricks the mind into seeing a third dimension instead of a two-dimensional image. Artistry and accuracy are displayed in this tattoo, and that is why a talented designer is needed to draw and tattoo it correctly.

The critical thing about geometric shape patterns is balance and symmetry, which is the key to happiness and contentment. These designs, very much like sacred geometry, are suitable for the mathematician who views the world as a collection of shapes that work together in a more significant way. Mandala designs are the perfect fit in this sense as they include both geometric exactness and the harmony of the universe.

Geometric shapes are subject to the study of geometry, which is greatly concerned with the dimensions of each figure. According to this study, every image can be broken down into geometric shapes, rendering it less realistic. The image becomes a mathematical equation that can be logically explained. Presenting images broken down in such a way represents them as apparently less complicated. It becomes a fragmented version of itself that is more easily applied by others, but not essentially more practical. Images of scale and design can be included in the tattoo to signify this. Graphs and planes are introduced to emphasize the need for mathematical precision in geometry and a disciplined mind.

Images that are formed by using geometric shapes express an attempt to make sense of something that cannot be understood in other ways. The shapes deconstruct the image that they portray and project a fragmented and distorted variant of the original. This can express the way an artist visualizes an image ahead of the creation, or it can serve as a visual demonstration of a fragmented mind. Moreover, it can illustrate a path to understanding, where each part must be considered before the complete picture can be understood. In this way, geometric shapes are the building blocks of knowledge, the base to build perception or perspective.