One of the most difficult symbols or designs when it comes to meanings and symbolism. In my 20 years of tattooing, recycling sign has been one of the hardest when I had to explain what is the meaning of the symbol. It was created by a college student Gary Anderson. There are six symbols that define or mean recycling. Those recycling signs are the universal symbol, generic materials recycling symbol, black symbol, recycled paper symbol, partly recycled symbol, and permanent paper symbols (for acid-free paper). Japan has recycling symbols that are slightly different from the usual around the globe symbols. It’s combined between the actual arrow loop sigh but with “explanation” inside about what has been recycled. 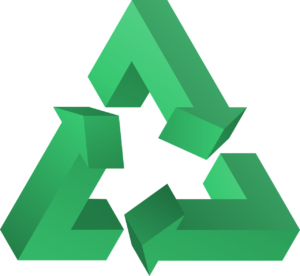 The very familiar sign of three arrows chasing themselves in a triangle shape is somewhat described as with comically ironic meaning since the actual story behind it is not that exciting. That’s primarily because we see it on every package that can be reused for manufacturing different products from something like heavy chemicals through organic baby food.

The “reuse” sign, or also known as Mobius Loop – its unfamiliar name, is often tattooed as a reminder for trying to live a greener lifestyle.

Unlike the QR code or Bar code, the recycling sign can also have some other transferable meaning, depending on if there is anything tattooed in the middle of the sign.

That infinite triangle is the basis of the design. Whatever you would like to use or insert inside this triangle to emphasize the meaning of the symbol is up to you. But definitely is a flexible design that can be combined with almost everything, and that’s how you could gain more depth behind your story.

This will be 100% one of my shortest posts, and it will stay “open” for more updates as they come along.