Widely known shortened name – Rhino comes from Rhinoceros, which holds the meaning “nose horn” is the second-largest mammal on earth. Nowadays, when on the verge of extinction, these animals are becoming more and more popular pictures to be inked. Although it’s a common misconception that its only meaning – which is often related to their look – is robust, resilient and powerful, in the realms of animal symbolism it also represents gentleness, steadiness, confidence, and solitude. They live in small groups so that’s why we can say that its an animal that holds by them selfs only the good and trusted friend and family. 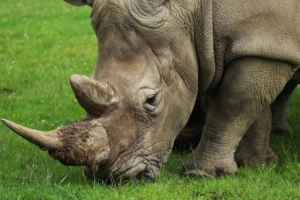 The essential details on the subject of meanings and symbolism when we talk about the rhinoceros comes from the parts of the world that they inhabit. Africa and Asia are the places where we can find the most significant populations of this magnificent animal. From using the skin for body armor through using the horns as cups and society symbols and status, we can see that history and symbolism of these beautiful beasts are full of deep meanings and symbolism.

It is not unfamiliar that these beasts have very impulsive and aggressive behavior, they are always ready to charge and possess explosive power too, but when they are not feeling in danger, they are actually entirely passive creatures that prefer to roam the wilderness alone.

The most important part of the rhino, which makes it so extremely popular, is its horn.
Apart from the rhino, the horn itself has several separate meanings such as:

In a rhino tattoo, the bigger the horn – the more powerful strength it possesses. Because of its physical nature of the horn on the head/nose, in early times, the rhino has been mistaken for the mythical unicorn. Thus the horn has been sold as a unicorn one until the late 18th century.

The full meaning of the rhino tattoo – horn included, has several different standings:

Due to its “combat readiness” perception, it is “purely” a man’s tattoo signifying brute animal force.
Many of the female population would not agree with this statement, though. Whether one prefers an original white rhino tattoo or with or in many other different shapes, colors, and sizes, incorporated with aa number of design featured that can change or modify the meaning of the art, the most popular two are tribal rhino tattoos and Cartoon rhino tattoos.

The tribal rhino tattoo designs usually represent stability and strength. The tribal pattern, in this case, such as in many others, has a connection with the spiritual realm and shows a deep connection with Mother Nature.

The cartoon rhino tattoos designs are often colorful and bright, accenting the gentle side of the animal, also pointing out that the ink represents a somewhat childish soul.
This way of portraying makes the rhino seem less frightening and less threatening. As a comical masterpiece, this powerful animal makes a beautiful art to look at.

This tattoo can be expressed as both large, covering full thigh, for example, and a small one, in both cases there are plenty of ideas and designs that one can choose from.

Though this particular tattoo is not a colorful one, most of the ink made is black and white, but it depends on one’s creativity.

The tattoo can also be in position, depending on what you would want to express.
For example, if the rhino is painted in motion, it usually expresses a moving force of some kind, or maybe overcoming a difficulty or an obstacle on the way or in life in general.
If the rhino it’s standing in its natural habitat and position, firmly on the ground, it can relate to stability, force, and firmness.

For everyone that is looking to express its unique personality or nature, the rhino tattoo is a perfect substitute for the average text tattoo. It looks super awesome adjusted on every part of the body, so this piece of art can be the ideal bod – decoration just for you.

And remember, rhinos are just unicorns that let themselves go. ☺