The unmatched craftsmanship and beauty of the Celtic jewelry make a distinctly stunning impression. Celtic wedding rings and the pendants make an excellent wedding gift as they embody a rich history and are a symbol of an unbreakable bond between hearts. Celtic wedding and engagement rings are just some of the trademark pieces of Celtic jewelry that is most common among Celtic culture and civilization.

However, in the last few years, wedding ring tattoos have also become conventional and trendy in tattoo art. Though, not everyone considers them entirely a suitable replacement for the normal wedding band. Some might say that it is bad luck, but as the wedding tattoo ring is for you and your beloved another half, all that should matter is what you make of it, and not what others think and consider it. 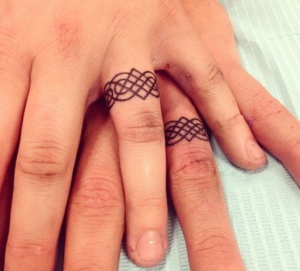 Wedding ring tattoos are usually, by tradition, made on the right finger of the left hand. According to the beliefs of some people, when a finger ring tattoo fades, it is a symbol that a breakup or bad luck in a relationship will come soon.

Despite the beliefs in different cultures, we already mentioned that in Celtic culture, the Celtic wedding is a symbol of something that never ends – endless love, marriage, commitment, and in ancient times, they symbolized arrangements between families.