The warriors used these tattoos as a means of intimidating their enemies. To them, this has been a war tactic that they found highly effective. Along with their fashion sense, the Celtics even did their hair in bright colors made of flower pastes. 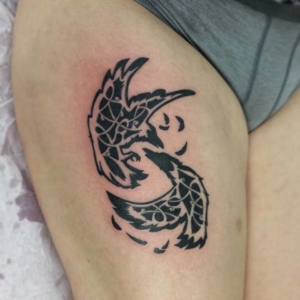 They tattooed their bodies by using a woad plant. They harvested and dried these plants to perform the process of tattooing. Then, they used the dried leaves, and they boiled them, straining them afterward. Then, they boiled the dried plants again, creating a viscous paste. The tattoo artists tapped the paste into the skin with a needle, forcing the stain to go underneath the skin. This formed the Celtic design of their choice.

The Celtic symbols are one of the most popular designs for warriors, as they used them as intimidation tactics. The Celtic knots are also a popular choice because of their appearance. They are often found on the upper chest and arms.

Celtics even love animals and use them as symbols for their tattoo designs. They believe that animals are a symbol of courage, protection, and ferocity. Designs such as circles, swirls, and trinities are also the symbol of organic energy, representing motion, time, nature, and wind.

Celtic knots are the variety of knots and stylized graphical representations of knots that find their uses in decoration. They also find their uses in the Celtic style of Insular art. These knots are famous for their adaptation for use in the ornamentation of Christian monuments and manuscripts like St. Teilo Gospels, the Book of Kells, and the Lindisfarne Gospels. Most of them are endless knots, and many are the varieties of basket weave knots.

The use of interlace patterns originates from the artwork of the late Roman Empire. Knot patterns appeared for the first time in the 3rd and 4th centuries AD. We can see them in the Roman floor mosaics of that period.

Spirals, step patterns, and even key patterns are dominant motifs in Celtic art before the Christian influence on the Celts. The influence of Christians over these people started around 450. These designs found their ways into early Christian manuscripts and artwork. There was also an addition of depictions from life, such as animals, plants, and human beings as well.

Knotwork is the constant motif in Celtic art, particularly in Irish manuscript illumination, but even in tattoos. Symbolically, it is much the same as the ouroboros, which is the snake that eats its tail, usually depicted as a complete circle.

It symbolizes constant motion – the developing, as well as coiling, and intertwining of human and cosmos in the never-ending cycle. Most Celtic tattoo artwork turns to knotwork, and this is not just for immediate identification with the Celtic region. It is also for the beautiful and intricate designs which an artist can create with that technique only.

The ancient Celts evolved the knotwork tattoos along with influence from Christian missionaries. They symbolize the great Celtic pride. As the Celts didn’t leave written records regarding their intricate art, the symbolic meanings of these tattoos are modern interpretations.

A lot of people use the knotwork tattoos as the symbol for family ties, various community connections, and marriage. There are different types of Celtic knot tattoos, and a number of them go by several names. The use of knotwork tattoos is particularly among the people who love Celtic art and culture. However, there are people who use them to show their connection to their loved ones, or simply for good luck.