Home
Blog
The History, Meanings And Symbolism Of The Celts And Celtic Art

The Celts are known as a collection of tribes that originate from central Europe and shared a similar language, religious beliefs, traditions, and culture. It’s thought that the Celtic culture began to progress as early as 1200 B.C. The Celts stretch throughout Western Europe, which included Britain, Ireland, France, and Spain through migration. Their legacy remains most prominent in Ireland and Great Britain, where traces of their language and culture are still noticeable nowadays.

The existence of the Celts was primarily documented in the seventh or eighth century B.C. The Roman Empire, which was recognized as a ruler of the more significant part of southern Europe at that time, referred to the Celts as “Galli,” meaning barbarians. Nevertheless, the Celts can be acknowledged as anything but barbarians, and many aspects of their culture and language have survived through the centuries.

In Wales, the native tongue Welsh, called Cymru by the Celts, represents a Celtic language and remains widely spoken in the region. In the same way, in Cornwall (the westernmost county in England, and near Wales), many inhabitants still speak Cornish, which is very similar to Welsh and Breton.

In Scotland, the Celtic language recognized as Scots Gaelic is still spoken, even though by a minority, and the local affiliate of the British Broadcasting Corporation (BBC) is known as BBC Alba, the Celtic name for the region.

In history, it is known that neither the Romans nor the Anglo-Saxons, who took what is now England from the Romans in the fifth century A.D., were able to invade Ireland effectively. This allowed the Celtic tribes that had lived there; namely, the Gaels and the Irish to survive, and let their culture to prosper.

By the time when Christianity arrived in Ireland with St. Patrick in 432 A.D., many Celtic traditions were included in the “new” religion. Some historians said that Catholicism was capable of taking over as the dominant religion on the island following the mass killing of Druids, known as the religious leaders of the Gaels.

Nonetheless, even with Christianity’s new-found prominence, traces of Celtic tribes culture stay behind. The national symbol of Ireland is the shamrock recognized as a green, three-pronged leaf that stands for the “Holy Trinity” of Catholic tradition, the Father (God), Son (Jesus Christ) and the Holy Spirit.

The Celtic cross stands for the region’s exclusive take on the Catholic cross. Additionally, lots of Celtic tribes folklore stories, like the legend of Cu Chulainn, are still told in Ireland.

Just like Welsh, the Irish language of Gaelic represents a Celtic language. By the time when the English colonized Ireland in the 19th-century Gaelic language disappeared at large, although the language is still spoken in the western part of the country.

Across Europe, the Celts have been accredited with many artistic innovations, including intricate stone carving and fine metalworking.

As a result, complex Celtic designs in artifacts crafted from gold, silver, and precious gemstones are the central part of museum collections throughout Europe and North America.

The art of the Celts is, in general, connected to the decorative artistry that is comprised of repetitive patterns, spirals, knots, foliage, and animal forms. Celtic art is easy to recognize since it includes identifiable features, whereas the Celts themselves are more challenging to define. Celtic people are associated with a wide geographical area, and their traditions are entrenched in a variety of cultures throughout extended periods of time.

By 800 B.C., Celtic art was obvious through much of Europe. During the Iron Age, there was this continental style of Celtic art that came to rise, which was less refined than later styles. Its designs often show axial symmetry. This art era, which was later known as the Hallstatt period, was the period that included the carving of jewelry, beads, sculpture, and even tableware.

As Celtic art traditions progressed, their style became related to people of La Tene culture. While the origin of La Tene culture comes from the early Iron Age people’s of the region, it reveals a marked Mediterranean influence. By 500 BC, Celtic traditions became ever more widespread in areas like the British Isles and stretched as far east as the Black Sea. Artistry was improved into more sophisticated and embodied with more classical Mediterranean features. There was undoubtedly a Greek and Roman influence too, which is not surprising given the proximity of the competing groups. Metalwork continued to utilize telltale Celtic designs that were rich in symbolism. Also, in various items like amulets and vases, the use of red enamel began to appear. 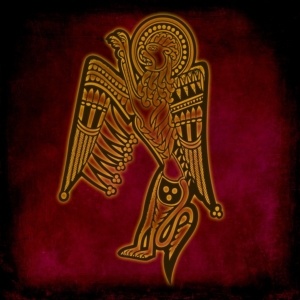 The Celtic art of Ireland is particularly striking because it remained relatively untouched during the Roman Empire. Its practice of La Tene-style artistry further improved through incorporating Scandinavian influences. Complex and highly symbolic silverwork was a popular form of British Isles art. Ardagh Chalice and the Tara Brooch are some of the famous Celtic art treasures of this area included. Also, certain regions and their inhabitants, like the Picts, left their particular mark to Celtic tribes’ art traditions. With the progress of time in the British Isles, Filigree’s work came to develop a high sophistication, and the illumination of texts obtained near-legendary status very similar to the one in the famed Lindisfarne Gospels.

Celtic art frequently merged with new influences like Christianity, as evidenced by tremendously ornamental Celtic crosses such as the tenth-century Muiredach’s High Cross. As more Irish monasteries were formed, the need for more ornamental objects grew. This is the main reason why Celtic art is often associated with Ireland and elsewhere in the British Isles, though its rich history also encompasses large tracts of continental Europe. The Middle Ages are the period when Ireland witnessed a dramatic Celtic Renaissance recognized as Insular Art, which is also usually placed under the umbrella of Celtic art.