There are some tattoos that seem to hold a negative connotation, and probably, none is more widely known than the teardrop tattoo. In most of the cases, placed just under the eye, the teardrop tattoo is internationally recognized as a symbol of killing another human being.

The tattoo design that includes a teardrop is often placed on the face and may resemble prison tattoo art since this is where the tattoo originated. Most commonly found under the eye area or on another area of the face, the tattoo resembles 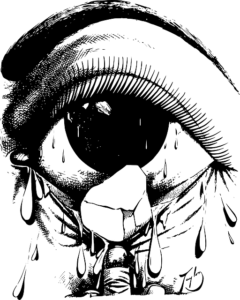 the shape of a real tear and is often solo. The teardrop tattoo design may include other additional art to indicate liquid, blood, or other symbology, but most often is not intricate.

Meanings behind the teardrop tattoo:

Originally, the meaning behind a teardrop tattoo was that a person had killed another person, lost a loved one, or been raped in prison. This was a way of “marking” an inmate as the property of another person or humiliating the inmate while in jail, as a tattoo on the face cannot be covered up or hidden. When these tattoo designs became popular as gangster tattoos, criminal tattoos, and as an eye tattoo among misleading young people, these individuals may not have realized the message they were sending wasn’t necessarily one of being tough, preferably one of being victimized.

The symbolism and meanings behind the teardrop tattoo:

There are many different opinions over the definition of a teardrop tattoo on the face. Prison tattoos often mean one thing to those incarcerated, another to law enforcement, and yet another to the general public. It is possible for the meaning of tattoos to change over time.

A tattoo design that includes a clear teardrop is typically assumed to mean that a person has only attempted to kill another person. This tattoo can also signify that a loved one has died, either naturally or as a result of violence. When worn in this manner, a clear teardrop can indicate that the wearer seeks vengeance.

Initially, for both sides, the teardrop denoted a prisoner that someone else in jail ‘owned.’ Placed next to the eyes by their ‘owners,’ hiding it was difficult, and it told everyone else about the pain, tears, and humiliation they faced. Many of these prisoners dealt with rape, extortion, and physical abuse. The amount of care and protection available to them in jail simply fell short of what they needed. Outside of prison, these men told others that they received it for killing a man in prison. Over time, the left side teardrop meaning changed from ‘owned’ to ‘I killed someone in jail.’ The number of tears denotes how many people died. The meaning of the tattoo of a teardrop on the left eye remains and continues to grow in popularity among gangs.

As time passed, the teardrop under the right eye meaning gradually branched off from the original and perceived meaning of teardrop tattoos. These tears placed on the right side, symbolize a lost gang member or family member. Gangs represent a second family to their members, and the death of one of their cohorts means the death of a brother or sister. When you see multiple tears on the side of someone’s face, it more likely means they lost many people dear to them, rather than that they murdered many people. Notably, women tattoo this teardrop to show solidarity with their spouse in jail. Of course, husbands can do the same. On the other hand, these tears on the right side could also mean that you belong to the Crisp. In the end, tear tattoo meaning changes with time, and quite honestly, the meaning behind them is personal.

Some times, this tattoo simply means a person has served time in prison, is a rape survivor, and represents a symbol of regret for past sins or as a symbol of being hardened by life.

In most of the cases, the best tattoo placement for a teardrop is beneath the eye or on the cheek.  People are free to incorporate teardrop tattoos into more traditional tattoos that can completely change the meaning associated with prison tattoos.

No matter what you believe, the meaning behind a teardrop tattoo might be, the obvious message is one of sadness and pain. In some cases, the pain may be self pain or inflicting pain on another, which ultimately results in self pain.

Reasons to Choose a Teardrop Tattoo:

Deciding to get a tattoo on the face is a serious choice that cannot be easily reversed. There are only a few reasons to choose a teardrop tattoo, if any. This is mainly due to the negative connotations the tattoo is associated with. In some cases, a famous person might wish to convey a false bravado. In other cases, those associated with a gang lifestyle might want to show solidarity or express pain at the death of a loved one. Even so, a teardrop tattoo is typically not a right choice for the average person.