Across the world, there are some people that have Native American blood, and desire to show it, by getting a tomahawk tattoo. However, there are people in the world without one drop of Native American blood, but still feel that the tomahawk is the perfect tattoo for them because of what this small weapon represents. Tomahawks can be seen as symbols of strength, but also the fact that the saying about burying the hatchet comes from Native Americans burying one of them to settle disputes with another tribe. 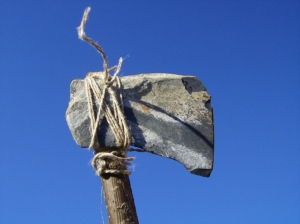 Description and Definition of the Tomahawk:

The tomahawk is a weapon that is very similar to an ax with a wooden handle, which, when first developed by Native Americans, had a head made of stone. This tomahawk weapon with an ancient stone head was later on developed in the 1600s using European technology when the stone head was replaced by iron, steel, copper, or brass metals, also refer to the Hatchet Axe.

The newly stylized tomahawk was a lightweight ax that had a metal edge on a solid wooden handle. This weapon was used in hand-to-hand combat, or as a throwing weapon. The tomahawk was only one among many different types of club-type weapons used by Native Americans. The word “tomahawk” originates from the Algonquian words Tomahawk or Tamahakan that actually means “used for cutting.”

Certain materials are required to make a tomahawk, and that are the following:

The essential role of all American Indian men was the making of weapons, such as the tomahawk. Making a tomahawk represented a time-consuming task that required both patience and skill.

History of the Tomahawk

Captain John Smith is someone who is known to be the first person in Europe who mentioned the tomahawk in 1612 using the term ‘tomahawk’ and described the weapons as “a long stone sharpened at both ends.” After that, tomahawks were described as hatchets or pickaxe style weapons and tools. The versatility of the tomahawk was so appreciated by the European settlers and traders that this weapon was adopted as an essential item and widely used in the New World. The tomahawk was part of the weapons that American soldiers carried during the Revolutionary War. Moreover, the Continental Congress required militiamen to take either a tomahawk or a cutting sword. The tomahawk served and was used as a powerful weapon by the Iroquoian and Algonquian tribe members of eastern North America. The tomahawk blade was extremely thin and from 7-9 inches long.

History of the Tomahawk – Symbolism

The tomahawk represents the Native American emblem of warfare that symbolizes two sides of a coin: war and peace. There was even a council ritual that was associated with the tomahawk. During every beginning of a war council, a tomahawk, painted red was placed on the ground in front of the chief. In the case when after the deliberation, it was decided to raise a war party, the war chief would raise the red tomahawk and rouse the warriors with war songs and dances. To bury a tomahawk meant to have peace, whereas to dig it up, expected to declare the most deadly warfare. From there comes the phrase “to bury the hatchet” in reference to the settlement of disputes. The tomahawks are crucial weapons that were used in important ceremonies, such as signing a peace treaty. These so-called ceremonial tomahawks were decorated in a more elegant way with paint and feathers and often had a hollow stem fixed at the end with a pipe bowl for smoking.

Possible designs of a Tomahawk tattoo:

Like any other tattoo design, there are different varieties of the tomahawk tattoo design. The reason for that is the tomahawk that can be done either in a more elegant way with a lot of detail and color or in a simple, basic black and white style. The design depends purely on the wish of the wearer. Below are some of the possible designs of a tomahawk tattoo: