There is a good reason why people decide to get a torch tattoo. The most important one is the fact that the torch, as a symbol, holds the very quintessence of life, spirit, and the power to rise above any challenge that gets in the way of your actions and pursuits. Below are some ideas about the design and placement of a torch tattoo, as well as some other reasons why people decide to get this kind of tattoo.

The one thing that you need to understand before you decide to get a torch tattoo is the meaning of the very element that the torch holds. When we talk about the image of a fire, it can be looked at as either a tool used by humans or an element to be feared. A wildfire that is not controlled can be a very catastrophic thing for humans, especially back in the day when the fire was first discovered. It is a known fact that fires can destroy entire villages, leaving nothing and even causing many deaths. During the times of war, the fire has also been used as a weapon, setting things on fire or using the fire to defeat enemies and burn whatever they can to the ground. Even though there are many negative aspects to the element of fire, this element can do wonders when used appropriately.

Without the flame of a fire, it’s almost impossible to cook food properly or even keep warm during harsh cold weather. Fire is what makes life easier for people who live in cold and snowy areas. This is especially true for nomadic people who used to travel in such places that required a source of warmness so they would not freeze to death. These are the kind of situations that give people the utmost respect for this element, for if it wasn’t for fire, many civilizations would have entirely fallen off the face of the Earth.

Because fire is such a wild element that can be dangerous when not adequately controlled, having a gadget such as a torch to restrain it changes the game completely. The image of a torch with fire not only represents a fire that is controlled, but also that there is a fire burning deep inside you, a fire that is not free. Through this image, you are showing to the world that you have the power to control this burning urge inside of you because a flame that runs wild can be deceitful, but a flame that is managed can be used to your advantage. Moreover, this image is a symbol of triumph, perseverance, courage, loyalty, and leadership. 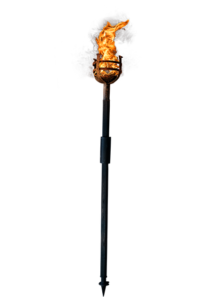 There are a couple of essential things that you need to have in mind when it comes to a torch tattoo. These details are highly significant because they can ultimately make or break your tattoo. First, you must find a torch design that is easily recognizable as such. Second, the fire must be present in the design, if not, then the torch seems to hold little to no purpose. Another thing that is very important when it comes to this tattoo is where on your body you will have this graphic and whether or not you would like to add any additional details like phrases or words to go along with the concept.

Since the first discovery of the element of fire, there has always been a way of containing it. The torch is probably the tool that was first created with the purpose of controlling the flame. In this manner, the torch not only represents a symbol of triumph and perseverance but also serves as a way of guiding oneself through dark territory where there is little or no light at all. A torch can be designed efficiently to look like a long stick wrapped in a flammable material set on fire. This kind of torch reminds people of an angry mob. This idea comes from the many movies we have all seen like Frankenstein, where the town and village people quickly form mobs. These mobs are formed at sporadic moments, and that is why people would set a stick on fire and chase the monster that they are afraid of out of their villages. The basic use of these torches was a quick threat to the beast as well as a way of guiding the mob through the dark to destroy them.

One better way to achieve this concept is through a more splendid torch design. The reason for this is that the owner of the torch tattoo wants to emphasize the positive sides of the invention instead of the negative ones. When the torch is designed in this way, it is considered as a sacred tool. Moreover, decorating your torch by adding elements like jewels and adding gold and silver color shows that you have a sense of class and royalty. A tattoo such as this is the embodiment of hard work and dedication to something.

A tattoo of a torch is a perfect design to add to your collection of tattoos. These tattoos can work well almost anywhere on the body, especially areas where you have enough space to fit an entire graphic of a handled torch and its flames such as the forearm, upper arm, and the legs. The forearm is the place where people most often decide to get a torch tattooed. The reason for that is because this part of the body gives the tattoo the illusion of behind held up high when the arm is stretched out above the head, symbolizing the sense of freedom and pursuit of happiness.