Home
Blog
Why Is Winter Season The Best Time To Get A New Tattoo?

Every day, there are thousands and thousands of tattoos created worldwide, 365 days a year. However, did you know that there is the recommended season to get a tattoo? Believe it or not, it is not summer in question. A lot of people tend to get their tattoos in the warmer months of the year as they want to show off their new ink at the beach or by the pool; however, summer is an extremely inconvenient time to get a new tattoo. It is sure that we all want to show off our tattoos in a bathing suit on the beach, but doing that at the time of the healing process is surely not recommended.

Fresh tattoos can easily become infected or damaged when they come in contact with direct sunlight; the bacteria live in bodies of water, as well as harsh chemicals such as chlorine, which keeps the pools clean. However, you are not supposed to miss all that fun, so instead of getting a tattoo during the summer period, get inked in winter. You will be surprised about how much easier your life is going to be if you get your tattoo during December, the opposite of July. And, when the summer will come, you will take a bath in the pool, having your skin completely healed. These are the six reasons why it is recommended to get your tattoo in winter: 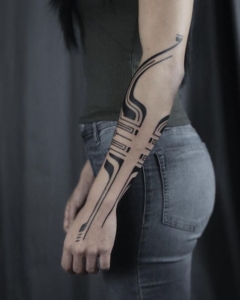 The exposure to direct sunlight will cause any tattoo to fade, but exposing a healing one to the sun will present an even bigger issue. New tattoos are quite sensitive, and you would like to keep them out of the sun so to make sure that they heal properly. To prevent sun damage, you should get your tattoo during the winter season. During this period, you are not going to walk around in a bikini, and even if you were, the exposure to the sun would be smaller, as it is colder. If you get your tattoo in winter, it will have time to heal during the colder months, before the summer season comes.

Unless you get a tattoo in a visible place, such as your hands, neck, or face, keeping a tattoo that is covered up during the winter is no big deal. If you have not told your parents that you have some plans to get a new tattoo, it will be much easier to let your new ink go under the radar at the sweater time as you already have an excuse to stay bundled up for the following few months.

While winter is on our way, the holidays during it also come, so it means that some extra cash may be coming on your way too. So, you can put that money to good use and reward yourself with a new tattoo. If you have a big piece in mind, it is quite important to consider whether you can financially afford to spend big bucks on something which is going to last forever. Particularly after the work you did in order to get ready for the holidays, you deserve to indulge, and so plan your following tattoo appointment after you receive your bonus for Christmas.

You probably don’t want to sit on the sidelines as you got a tattoo during the summer period because you are going to have more fun in the sun with a healed tattoo opposite to a fresh one. With getting a tattoo during the winter, and permitting it to heal before the summer comes into effect, you will not have to miss out on those beach excursions or swimming in the lake, as your healed tattoo will not be so prone to infection.

If you had a tattoos previously, you would know that there is a transitional healing period. Between the time of getting the tattoo and the time it heals, the tattoo is going to peel and scab over. This is entirely normal and healthy for the tattoo, but it is not good for seeing. When it is summer, and your tattoo can be seen, people are going to give you questionable looks and comments. A lot of them don’t know that this is part of the process of healing and normal, and it can get annoying trying to explain the phenomenon to people that do not have any tattoos. However, if you get the tattoo in the winter season, you can cover it up while it peels and waits to show it off when it will be pretty.

There is nothing worse than getting a tattoo when the temperature outside is very high, and your body drips with sweat. You should keep yourself from feeling miserable if your tattoo shop does not have an air conditioner during the summer period by doing that during the winter. Even if the studio which you chose is not the warmest one, you can always keep warm with a sweatshirt during the appointment. The last thing which you want is to pass out from the dangerous combination of tattoos and got weather, but you will not need to sweat if you get your art tattooed in the winter season.