Home
Blog
Siddhartha Gautama Or Buddha: The Sense Of Peace And Serenity.

There are a lot of religions and cultures around the world, in which Buddhism is one of the most common and colorful ones. It is the fourth-largest religion in the world, and even though the number of followers does not grow as fast as other major religions, the millions of people it attracts still have a significant influence in the world. Buddhism is so much popular, and it is in tradition because of its founder Siddhartha Gautama. Buddha, which means ”awakened one” is a title given to its founder. Buddhism and Buddha are some of the most popular subjects in tattooing. Of all the figures in Buddhism, the Buddha himself might tell me the most popular one when it comes to tattoo imagery. 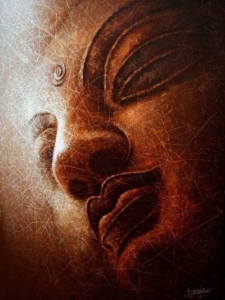 These tattoos mainly represent a sense of peace and serenity. They are also a symbol of who you are as a person. Whether you are a practicing Buddhism or you are only a firm believer in the philosophy that Buddha taught and stood for, these tattoos can have some symbolic meaning to you.

There are also some hidden messages, as well as symbolism, which you can use for your tattoo design when you choose a Buddha design. Buddha’s tattoos are beautiful and straightforward. They look lovely when they are skillfully inked with such details on your body.

Symbolic of all that his life and enlightenment represented, Buddha is usually portrayed in tattoo much as he is in Buddhist art – with a serene and beautiful face, in a cross-legged meditative position, as well as with hands in a meaningful gesture (mudra). In this example, the hands form a mudra, which symbolizes turning the Dharma wheel.

The Buddha usually represents an escape from the grasp of worldly concerns, compassion for everyone else, as well as wisdom. He was often moved by the suffering of other people, and he also devoted his life to teaching ways in which that suffering could be controlled, as well as overcome.