One of the perfect tattoos for both tattoo enthusiasts and horror enthusiasts is the tattoo of zombies. Moreover, this tattoo is a perfect choice for people who are into the bloody genre. According to the definition, a zombie is a fictional (or not) undead being revived from a human corpse. There is also the possibility of a zombie animal.

Most often, zombies are found in horror and sci-fi movies. These creatures are usually reanimated by magic in most old tales. However, in the majority of shows they don’t revolve around magic being the cause. In most cases, a virus has infected a person, and as a result, he evolves into these creatures we all know today. The virus is normally spread via a zombie bite or being infected with their saliva and blood.

The first time the term “zombie” was uncovered to Western culture was in The Magic Island book, written by W.B. Seabrook. In this book, the writer claims that voodoo cults in Haiti are responsible for resurrecting the death through magic. After this book, there were lots of mentioning zombies over the years.

1932 is the year when the movie White Zombie was created, and this movie is considered as one of the earlier examples of zombies in the film. In this film, zombies were portrayed as being mindless, evil henchmen under the spell of a magician. This also originates from Haitian folklore.

Nowadays, zombies tend to be cruel, flesh-eating monsters that have a greedy appetite. There are many examples of this in movies like I Am Legend, Night of the Living Dead, 28 Days Later, World War Z, and Day of the Dead.

There are so many variations of zombie tattoo, and this comes from the fact that there are so many recognizable zombie characters or zombies that can be anything or anyone. Any undead creature can be a zombie. This is a trendy way to get a zombie tattoo. If you want it, you can decide to get a tattoo of your friend on your body in the shape of a zombie. Characterized by wounds, cuts, and skin that’s falling off, a generic or a classic zombie might be your preference if you’re a fan of these creatures.

Walking Dead included some memorable zombies over the past years. This show runs since 2010 and is still very popular. Some of the zombies (other known as “walkers”) in this show are so different, which might be the reason for fans of the show to get them memorialized on their skin in the form of a tattoo. One unforgettable walker from the show is Bicycle Girl that appeared in Season 1, Episode 1. One of the creepiest walkers in the show was the Well Walker. This walker is portrayed as a bloated body that’s been in the water too long and. After they pull Well Walker out of the well, he falls apart. The show features a lot of other popular zombies that can be used in a tattoo design. 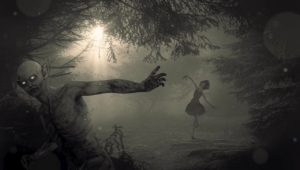 Bill Murray is a very popular, timeless actor who has been memorized for every role he took part in. When it comes to tattoos, he is best recognized for his role in the movie Zombieland. This is the story where Bill Murray plays himself. After dressing up as a zombie to make a prank to the main character (Jesse Eisenberg), Murray finds himself shot with a shotgun. It seems that his prank was a little too realistic. Either way, the Bill Murray description of a zombie is a very trendy zombie for fans of this creature.

Bub – Day of the Dead

Another popular zombie for fans of this genre is Bub from Day of the Dead. Bub is portrayed as a test subject of Dr. Logan and was evidence that not only could zombies being trained to be submissive, but they might also have memories of their living years and can express emotion. Bub is an exciting character as he tries to relearn how to read a book, use a razor, use a toothbrush, and how to handle a gun. The only time we are reminded that Bub is still a zombie is when given the empty gun, he points and pulls the trigger. Zombie fans seem to be attracted by Bub and his human-like traits.

We can all remember the most remarkable zombie that was part of the music video Thriller, by Michael Jackson. In this music video, the King of Pop plays a zombie who has some great dancing skills. Michael’s love one was dreaming when a zombie Michael appears, and it seems as if he is going to eat her. After she wakes up, he offers to take her home. However, this iconic scene it eternally memorized in every one of us who has ever seen this video along with others who haven’t. The dance moves made form Zombie Michael will go down in history as one of the most imitated dance sequences ever.

In this movie, Tar Man is created after a bumbling security guard by accident releases the 2-4-5 Trioxin gas. This release causes two dead men to be reanimated, and one of them is the popular, rotting zombie known as Tar Man. This is still the number one choice among fans of zombie tattoos.

As can be seen, there are so many designs of zombie tattoos. From famous actor zombies to the unidentified and disgusting zombies, it seems as people decide to get them at some point. These zombie tattoos mentioned above are only some of the best representations of zombies, but you can always choose your favorite that is not one of these.