Buddhism is the fourth largest religion in the world, which has more than 520 million followers, which is more than 7% of the global population. These followers are called Buddhists. Buddhism encompasses a lot of traditions, spiritual practices, and beliefs. They are mostly based on original teachings attributed to Buddha and resulting in interpreted philosophers.

Buddhism came from India as the Sramana tradition, between the 6th and the 4th centuries BCE. After that, it spread through much of Asia. The two major extant branches of Buddhism are recognized by the scholars Theravada and Mahayana.

Most of the Buddhist traditions share the goal of overcoming suffering and also the cycle of death and rebirth. These things are done by the attainment of Nirvana or through the path of Buddhahood. Buddhist schools also vary in their interpretation of the path of liberation, canonicity, and relative importance to the different Buddhist texts. This happens together with their specific practices and teachings.

Generally said, Buddhism is an Indian religion that has its associations with the teachings of Buddha. Buddha was supposedly born Siddhārtha Gautama. Some early texts have his name as “Gautama” or “Gotama” without mentioning “Siddhārtha.” These Early Buddhists Texts also mention his life, and social backgrounds, but are inconsistent.

Mythology acceptance was a crucial factor in the development of Buddhism. Without the rich mythology connected with Buddha, the religion collapse. Mythological motifs are even used in tattoo art.

Buddhist tattoos are the representations of Buddhist symbols, deities, and mantras. A lot of tattoo lovers adore having a tattoo of Buddha, Zambala, Tara, eight spokes, mantras, and so on. 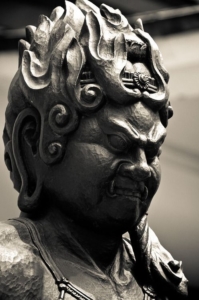 Buddha tattoos are meant to replicate the teachings of the great spiritual mentor and leader. The followers of Buddha are not necessarily the only ones that prefer but a lot of other people that believe in the ultimate truth of life.

Here, we will talk about the Buddhist mythology of Japan, particularly of Fudo Myo-o, the fierce protective god, used in tattoo art.

In the Buddhist mythology of Japan, Fudo is one of the fierce protective doss or Myo-o, a form of Buddha. These gods are ferocious in acceptance, to frighten away evil spirits, as well as to destroy ugly passions and ignorance.

Fudo Myo-o, often shown with blue skin, bears a sword in one hand, and also a rope in the other one. In this way, it symbolizes cutting through all delusion, the destruction of obstacles, tying up evil creatures, as well as catching and leading believers toward enlightenment.

He also sits or stands upon a diamond-hard rock, which is the symbol of resoluteness. Behind him, there is a halo of flames, which is also the symbol of purification. One of the eyes of Fudo looks up, and the other looks down, as he guards the heaven, as well as the earth.

Fudo Myo-o is a really popular motif in Japanese tattoo art, usually appearing as a black piece, as well as a central and dominating figure of protection. Fudo Myo-o tattoos celebrate the fierce protective god Fudo in Japanese Buddhist mythology.

The terrifying appearance of Fudo scares away evil spirits and destroys ugly passion, as well as ignorance, among some other undesirable qualities. Fudo Myo-o tattoos are usually on the largest side and make for an excellent back tattoo for those that love amazing Japanese tattoos. These tattoos look amazing, and they never fail to impress. Brilliant and bold, these fearsome Fudo tattoos are favorite among Buddhists, but also among other cultures and traditions.

Fearsome and protective, preeminent and wise, the Fudo Myo-o is an intense god. Fudo Myo-o had his image preserved in some of the most impressive traditional Japanese artworks. You should take this imposing, as well as a formidable subject for your following tattoo, for an awe-inspiring visual.

Fudo Myo-o is the ultimate protector in the Shingon Japanese tradition, and that is why flames always surround him, with his infamous menacing expression.

If there is any god with whom you would not like to mess, it is Fudo Myo-o. He has a lot of faces, maybe as the greatest protector has to have the capacity to frighten any and every living soul.

There are not a lot of tattoos which are manlier than the sacred image of Fudo Myo-o. He appeals to the desire, as well as duty, and many men have to protect their loved ones from danger. Not just that, but Fudo is profoundly respected for this particular role. This is as in the tradition of Japan, and people are grateful for his protection. A lot of men hope to be seen as fearless, as well as courageous protectors for everyone in their lives.

To achieve a great Fudo Myo-o tattoo, you should stick to tradition. The tattoo of this god is not mean to be small or secret. That’s why you should place his image on the shoulder, back, or chest, in order to get the full effect. Flames of true, as well as deep reds and oranges, are an absolute addition. They will give this god his imposing aura, and also, his mighty image will show that he means business. Remember to choose the expression of Fudo Myo-o wisely as well.