The history of tattooing and tattoo art in the new world is limited almost only to the reports of early investigators and the presence of some figurines. These are some figurines whose designs resemble observed tattoos. Also, in North America, for example, the tattooing practice was pervasive among indigenous peoples, and it carried much of the same cultural, as well as spiritual and symbolic importance, which was observed in other cultures.

From Virginia to California, as well as from the Arctic to Louisiana, both men and women were tattooed in every conceivable way. For example, from representational family crests or tomahawks to some abstract chin strips and collections of dots, native people used tattoos in order to represent identity and achievement, as well as to acquire spiritual strength and protection, gain entry into the afterlife, and achieve some relief from physical ills. For us today in “The New World”, very little is left from the breadth and depth of the symbolism, as well as the meanings attached to their tattoos. 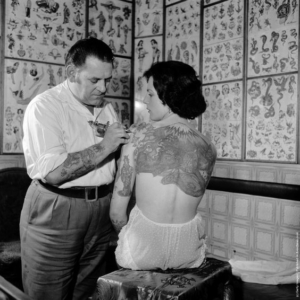 But, there are some exceptions to this rule, and they are the tattoos performed in the Pacific Northwest among the Haida and Kwakiutl. Early explorers of the 1500s, in response to the native groups in Central, as well as South America, were repulsed by the examples of tattooing which they have discovered there, and as a result of that, we are unluckily left with just very little information.

Among the Aztecs, the Maya, as well as the Inca designs, could be elaborate and representational, sometimes representing some achievement but maybe also occasionally used for penal aims.

It was actually Charles Darwin, in his The Descent of Man, that observed that:

“Not one great country can be named, from the polar regions in the north to New Zealand in the south, in which the Aborigines do not tattoo themselves.”

Even though more than one century has passed since these words were said, they seem much true than ever before, and they are also supported by an increasing body of research, as well as history and interpretation. Ancient, as well as “the new world” peoples around the world, have used tattoos as a means to a seemingly infinite number of ends. Even as tattooing enjoys a modern renaissance, it is pretty clear that we are taking some part in a very long tradition, the one whose origins are still not exactly discovered, but whose continuation seems inevitable.