In the first part of this subject, we were talking about the criminal and underground approach of the subject on Japanese tattooing. We must all agree that Japanese tattoos are not 100 % crime-related. You probably have some friends that are into a tattoo and a few of them like Japanese tattoos. That is the part of the Japanese tattoo art that left the society of Japan and spread all around the world. 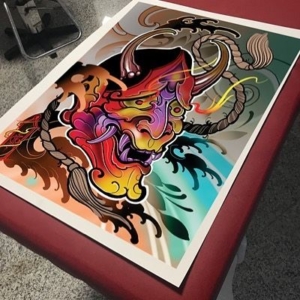 Irezumi are traditional tattoos in Japan. Irezumi is also the Japanese word for a tattoo, and Japanese tattooing has had its distinct style, which is created over centuries. Irezumi is done by hand, with the use of wooden handles and metal needles, which are attached via silk thread. This is a method that requires special ink, which is called Nara ink. It is a painful and time-consuming process, done by a limited number of specialists. The tattoo artist is called Horishi, and he often has one or more apprentices working for him for a long period. They usually become part of the horishis tattoo family.

Irezumi was firstly connected with firefighters, who wore them as a form of spiritual protection. They have also admired figures of bravery and roguish sex-appeal, which inspired imitation. At the start of the Meiji period, the government of Japan outlawed tattoos, and Irezumi took on connotations of criminality. A lot of Yakuza and other criminals now avoid tattoos for this reason. Irezumi in Japanese means ‘inserting ink,’ and it can be written in different ways.

Even though tattoos have gained popularity amongst the young people in Japan because of the Western influence, there still exists a stigma on them amongst the consensus. Unlike the U.S., finding a tattoo shop in Japan can be quite difficult, with a few placed in areas visited by U.S. tourists.

Modern tattoos in Japan are done in a similar way to the western ones. Unlike the traditional Irezumi, where most of the tattoo decision making is left up to the tattoo artist, customers bring in a design of their choice, or they can also decide on what they would like at the shop. Modern tattoos are done by an electric machine, in which the ink is inserted into it, or the needle tip can be dipped into ink for the application. The process is also much more formal than the one of western tattooing, but it has its beauty and symbolism that made the Japanese tattoo worldwide respected and loved.