Benzaiten, or Benten for short, is one of the Japanese Seven Gods of Good Fortune. Benten is a Japanese Buddhist goddess.  She originated from the Hindu goddess Saraswati. The revering of Benten started in Japan during the 6th through 8th centuries, basically through Chinese rendering of the Sutra of Golden Light, which has a part devoted to her.

The goddess Benten is also mentioned in the Lotus Sutra, and she is usually depicted holding a biwa, which is a traditional Japanese lute, just as Saraswati holds a veena. Benten was also worshiped as the personification of wisdom in the Tokugawa period.

She is also the only female deity among the seven gods, and she is a symbol of eloquence, music, arts, literature, wisdom, as well as love and the sea. Besides shown with a biwa, Benten is sometimes also shown with a white snake that serves as her messenger or riding a sea dragon. 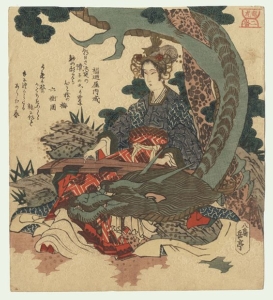 The goddess Benten in the Japanese culture has been considered the goddess of everything that flows, such as water, words, time speech, eloquence, music, as well as knowledge by extension. The original characters which are used to write her name read “Biancaitian” in Chinese and “Bensaiten” in Japanese, and they reflect her role as the goddess of eloquence.

As the Sutra of Golden Light promised protection of the state, this goddess also became protector-deity in Japan, at first of the state and after that of the people. After that, she became one of the Seven Gods of Good Fortune, when the Sino Japanese characters change her name into Benzaiten, which emphasized her role in bestowing monetary fortune.

Being the Buddhist patron goddess of literature and music, as well as of wealth and femininity, Benten is a popular theme in Japanese tattoo art. She is associated with the sea. The legend says that she married a sea dragon, which ended his hostile actions of the island Enoshima.

The Seven Gods of Good Fortune are a popular theme in the Japanese tattoo art, most often depicted together as a group or sometimes shown individually