Have you ever heard about Corto Maltese? Who is he, and what is he famous for? Well, Corto Maltese is a “cult” character of the best of the European graphic novel genre.

However, it is also a veritable 20th-century literary legend. He is a traveler, an ironic sailor that combines Mediterranean looks and character traits with Anglo-Saxon culture. 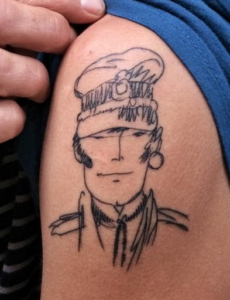 Corto Maltese is born on the 10th of July, 1887, in La Valletta, Malta. He is the son of a Gibraltar gypsy and a Cornish sailor. Form his mother; he inherited his Mediterranean features and passions. From his father, he inherited a longing for a voyage. However, from both of them, he inherited a love of mystery and the talent of seeing beneath the surface of things.

Corto attends a Shul in Malta, and he becomes familiar with the Kabala. As a young man, his immersion in the life of the ports of this sea island between Africa and Europe brings him face to face with a bracing, and unlimited diversity of men and philosophies.

Corto, which in Spanish means “fast,” was created in 1967. The man responsible for the creation of Corto Maltese is the great Venetian illustrator Hugo Pratt. Corto is an anti-hero who prefers freedom and imagination to wealth. He is a modern-day Ulysses who takes us along on his travels to fascinating places around the world.

Corto Maltese is the series of adventure comics, named after the character Corto Maltese. He was an adventurous sailor, and the Italian comic book creator Hugo Pratt created the comics in 1967. People highly praise the comics as some of the most artistic and literary graphic novels ever written. Several animated films adapted them, and they were translated into numerous languages.

The series features Corto Maltese, who is an enigmatic sea captain who lives in the first three decades of the 20th century. Born in Valletta, on the island of Malta, on the 10th of July, 1887, Corto Maltese was the son of the sailor from Cornwall and a gypsy from Seville.

In his adventures, which are full of real-world references, Corto has often crossed with real historical characters. Some of them are the American author Jack London, the American outlaw Butch Cassidy. Among them was the German flying ace from the First World War, named Red Baron, and a lot of others.

Corto Maltese is the laconic sea captain adventuring during the early 20th century, between 1900 and 1920s. A “rogue with a heart of gold,” he is sympathetic and tolerant to the underdog.

As a boy, Maltese discovered that he had no fate line on his palm. Hence, he carved his own with the razor of his father, determining that his fate was his to choose. Even though maintaining a neutral position, he instinctively supports the disadvantaged and oppressed.

The character embodies the skepticism of the author of national, religious, and ideological assertions. Corto befriends people from all walks of life. These people include the murderous Russian Rasputin, British heir Tristan Bantam, voodoo priestess Gold Mouth and Czech academic Jeremiah Steiner.

Also, his acquaintances treat him with great respect, as when a telephone call to Joseph Stain frees him from arrest. This happens when people threaten him with the execution on the border of Turkey and Armenia.

The favorite reading of Corto is Utopia by Thomas More, but he never finishes it. He also read books by Lugones, London, Stevenson, Conrad, and Melville. Moreover, he read quotes from Rimbaud.

Corto Maltese stories range from straight historical adventure to occult dream sequences. He was there when the Red Baron is shot down. He helps Jivaro in South America and flees Fascists in Venice. However, he also unwittingly helps Merlin and Oberon to defend Britain. He helps Tristan Bantam to visit the lost continent of Mu.

Chronologically, the first Corto Maltese adventure, called La Giovinazzo, or The Early Years, occurs during the Russo-Japanese War. In some other albums, he experiences the Great War in a few locations. He participates in the Russian Civil War after the October Revolution and appears during the early stages of Fascist Italy. In a separate series by Pratt, The Desert Scorpions, it is mentioned that he disappeared in Spain during the Spanish Civil War.

The character of Corto Maltese debuted in the serial Una Vallata Del Mare Salato or Ballad of the Salt Sea. This is one of several Pratt stories published in the first edition of the magazine Sergeant Kirk in July 1967. This story centers around the smugglers and pirates in the Second World War-era Pacific Islands.

Generally said, Corto Maltese is a modern anti-hero who believes in the infinite potential of men. He is a risk-taker that is continuously testing the fine line between utter recklessness and grand goals. For him, even his failures expand his spirit, his circle of loyalties, and his knowledge.