It is a common knowledge that sailors sported tattoos, or “tatau” as they once called them in the Polynesian language, as souvenirs or memories that they brought back from the maritime and their adventures at sea. Living a life full of adventure and mystery, the lure of the sea that brings back with it danger, risk and superstition is the reason why sailors use to mark their bodies with tattoos. These tattoos stood as badges of honor that marked personal and professional milestones. Back in the day, sailors used gunpowder for ink. Sailor tattoos belong to the group of nautical tattoos, and there is a lot of history behind them. 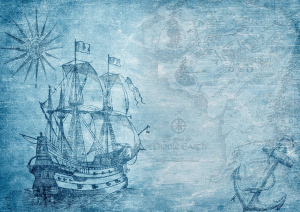 There are a lot of reasons why people choose this kind of tattoos. For instance, they represent a symbol of patriotism; they serve as lucky charms or remind you of your memories from the places you’ve visited.

Nowadays, sailor or nautical tattoos are among the most popular tattoo designs that hold a lot of meaning behind them. These tattoos are part of the maritime tattoos, and their designs can include an image of a sailor (a portrait of a sailor) or a whole sailor. The tattoo with a sailor symbolizes bravery, adventure, mystery, heroism, etc. However, there are some designs, where the sailor is combined with other naval themes. For instance, the design can include a sailor riding a shark. The shark symbolizes aggressive lust for life. This tattoo represents curiosity, fearlessness, intelligence, and strength.

The tattoo of a sailor can also be combined with a ship. The ship is very metaphorical since it represents the place where sailors spend their time and work.  The ship symbolizes adventure. Furthermore, this tattoo design can include a nautical star since it represents a symbol of a sailor always to be able to find his way home, and the whole design symbolizes guidance. There are other nautical symbols that can be part of a sailor tattoo, such as:

Other tattoo designs can include a sailor girl. Unlike the male sailor, the girl tattoo is strictly a pinup material presenting a girl in a sailor uniform. Although the girl is shown wearing a white cup and pinafore uniform, it is not unusual for the neckline to be cut low and the whole outfit to be tight-fitting.

These tattoo designs are an excellent choice for people who are interested in and fascinated by the maritime and the life of the sailors. However, they are also perfect for men who want to achieve the tough guy look, since sailors have always had a reputation for being rough and tumble kind of guys. Having tattoos on their bodies also helped in building their reputation. These tattoos are for both men and women who are adventurous enough to wear them since tattoos are considered to be an art form and a way of expressing our personal lifestyles.