In Norse mythology, Hel us represented as a being who rules over a realm with the same name. This is a place where she receives a segment of the dead. She is present in the Poetic Edda, written in the 13th century from former traditional sources, and the Prose Edda, written in the 13th century by Snorri Sturluson. Moreover, she is part of the poems recorded in Heimskringla and Egils saga written from the 9th and 10th centuries. An episode in the Latin work Gesta Danorum, written in the 12th century by Saxo Grammaticus, is mainly considered to refer to Hel, and she may emerge on various Migration Period bracteates.

According to the sources as the Poetic Edda, Prose Edda, and Heimskringla, Hel is considered to be a daughter of Loki. There are other books like Prose Edda written by Gylfaginning, stating that Odin charges Hel as the ruler of a realm with the same name, placed in Niflheim. In this same source, she has portrayed as half blue and half flesh-colored being that has a dark, downcast look. The Prose Edda gives details about Hel’s rule over enormous mansions with lots of servants in her underworld realm and plays an essential role in the attempted resurrection of the god Baldur.

According to several scholarly theories that refer to Hel’s potential associations to figures appearing in the 11th-century Old English Gospel of Nicodemus and Old Norse Bartholomeus saga postola, she may have been recognized as a goddess with potential Indo-European parallels in Bhavani, Kali, and Mahakali or that Hel may have become a being only as a late personification of the location of the same name.

According to the etymology, this word comes from the Old Norse feminine proper noun Hel that is equal to the name of the place over which she rules, Old Norse Hel. The word includes cognates in all branches of the Germanic languages, and that includes the Old English hell (and thus Modern English hell), Old Frisian helle, Old Saxon hellia, Old High German hella, and Gothic halja. All forms eventually originate from the reconstructed Proto-Germanic feminine noun *xaljō or *haljō (meaning ‘concealed place, the underworld’). In turn, the Proto-Germanic form comes from the o-grade form of the Proto-Indo-European root *kel-, *Kol-: meaning ‘to cover, conceal, save.’

The term Hel is etymologically correlated to Modern English hall and thus also Valhalla, an afterlife’ hall of the slain’ in Norse Mythology. Hall and its numerous Germanic cognates originate from Proto-Germanic *hallō, meaning ‘covered place, hall,’ from Proto-Indo 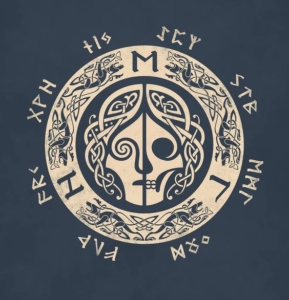 In Norse mythology, Hel is represented as a goddess whose father was the trickster god Loki and her mother, the giantess Angrboda. They had three children: the wolf Fenrir, the serpent Jörmungandr, and their only daughter Hel.

Hel was often depicted as a half-black and half-white monster born with the bones on one half of her body fully exposed. She spends her childhood with Fenrir and Jörmungandr in Jotunheim, country of the giants, until Odin, the king, and ruler of the Aesir made a decision that they should live in Asgard where their father came from.

Hel is the queen of the dead, and it’s related to a hellhound named Garmr as well as crows. She is also occasionally affiliated with the Hagalaz Runestone.

The other Norse gods in Asgard felt uncomfortable in the company of Hel. This is the particular reason why Odin agreed to send her away and gave her the rule of the World of Niflheim – one of the Nine Realms, where she became known as the queen of the dead.

According to Norse’s belief, most people went to Niflheim when they passed away. Only warriors who lost their lives on the battlefield did not go to Niflheim. As an alternative, half of the brave soldiers who died on the battlefield went to live with Odin in his home Valhalla and the other half with Freya in her afterlife realm Folkvang.

Niflheim was separated into sections, and among them, there was a section one called the shore of corpses. Here, a castle filled with poisonous serpents stood facing north. This section was full of murderers, perjurers, and adulterers who suffered while their blood was sucked by a dragon named Nidhogg.

When Odin’s son Baldur died because of Loki’s betrayal, his soul was also sent to Niflheim. Hermod, another son of Odin’s, decided to go to Hel to persuade her to send Baldur home. But Loki played another of his tricks and thus made it impossible for Baldur to return to the real world. The essential reason for the end of the world, a battle between good and evil (dead) knew as Ragnarok came as a result of this betrayal.

In Niflheim, Hel owned two servants named Ganglati and Ganglot. It is said they moved so leisurely that they seemed to be standing still. They deliver her meals in a dish named “hunger” and with a knife named “famine.”

As queen of the dead, she has strong symbolism and history. That’s one of the many reasons why this is a good choice for your next tattoo project.