Home
Tattoo History
What Is Norse Mythology And It’s Meanings In The Tattoo World?

The Scandinavian mythological framework that revolves around the time of the Viking Age (c. 790- c. 1100 CE) is the period that is referred to as Norse mythology. In history, this period is recognized as the body of myths of the North Germanic peoples that begins with Norse paganism and continuing after the Christianization of Scandinavia and into the Scandinavian folklore of the modern period.

Before the Middle Ages, when Norse, also known as Vikings, converted into Christianity, they had their own vibrant native pagan religion that was as harshly beautiful as the Nordic landscape to which it was closely associated. The nowadays known “Norse mythology,” including a set of religious stories that gave meaning to the Vikings’ lives, was the focus of that religion. The centerpiece of these stories or myths was the life of the gods and goddesses who possessed fascinating and highly complex characters, like Odin, Thor, Freya, and Loki.

One very important thing about the Norse religion is the fact that these myths never had a true name, and those who practiced simply called it “tradition.” Those people who, even after the arrival of Christianity, continued to follow the old ways were sometimes called “heathens,” which originally meant simply “people who live on the heaths” or elsewhere in the countryside, and the name has stuck.

Religions are considered to be attempts by mankind to reach the numinous, and that was also the case with Norse religion. If we approach this religion with the open mind, we can identify within it the ordinary human pursue to live life in the presence of the transcendent majesty and joy of the sacred besides the fact that some aspects of it might strike the modern people as bizarre. People these days continue to be inspired by the vitality and wonder of the Norse mythology and the gods who inhabit them even though thousands of years passed since the last Vikings laid down their swords.

For the Vikings, the world they lived in was enchanted, it was unnecessary to seek salvation from the world, but instead found joy in it, and marveled at, “the way things are,” including what we now call both “nature” and “culture.” Their religion and myths didn’t make the sordidness, conflict, and injustice of earthly life look better, but instead accepted it and praised the effort to master it through the achievement of great deeds for the good of oneself and his people.

Who Were the Vikings in the Norse Mythology?

The Vikings originated from modern-day Norway, Sweden, Denmark, and Iceland, people who traveled throughout much of the world during the period known as Viking Age (roughly 793-1066 CE). In history, the Vikings are known as seafaring raiders, conquerors, explorers, settlers, and traders. The native language of these people was the Old Norse language, written in runes, and used for practicing their ancestral religion.

What motivated the Vikings to sail far away from home where the timeless, universal human needs: prosperity, status, and power. Just like in any other human society, those Vikings who possessed more wealth naturally had more prestige and power, and vice versa. A Viking was considered to be wealthy if he owned gold, silver, gemstones as well as land.

Thanks to the Vikings, we are now able to understand not their pre-Christian religion and Norse mythology, but also that of the other Germanic peoples as well. If it weren’t for the Old Norse poems, treatises, and sagas that were written during or relatively soon after the Viking Age, we would never have much fuller picture of what the Vikings’ religion was like as well as the religions of any of the other pre-Christian Germanic peoples. But from the little that we do know about those religions directly, they seem to have been variations on common themes that were also shared by the Norse, so we can use the Norse sources to help us reconstruct those hoary religions, too.

Who Are the Germanic peoples?

The Germanic people are one of the native peoples of northern Europe, along with the Celts, Sami, Finns, and others. Historically, the lands of these people occupied the major part of Scandinavia, Iceland, the British Isles, and continental Europe north of the Alps. These people are represented best by the Viking tribes, the Anglo-Saxons, and the continental Germanic tribes, but they incorporated many other groups as well. 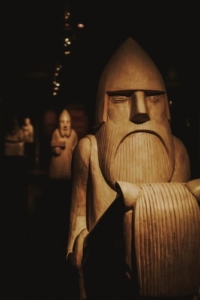 There was a common core worldview, cosmology, and, to a large extent, a common pantheon as well besides the regional and temporal variations in the pre-Christian religion of the Germanic peoples.

If you’re a person who comes from northern European descent (including English, Scottish, German, and northern French descent), you are free to say that you’ve got some Germanic blood in you. In other words, that means that some of your ancestors practiced something very close to the religion represented by Norse mythology.

If you don’t have any Germanic ancestry, that doesn’t mean that you cannot be fascinated by the Norse/Germanic mythology and considered it as illuminating. Mythologies are expressions of a particular person or people, but they’re not just that since there tends to be a flash of something more eternal and universal in them as well.