Home
Tattoo History
Baldur: The Loveliest Of All The Norse Gods In Aesir

One of the most beloved and the loveliest of all the gods in Aesir is Baldur, also known as shining Baldur due to his exuded charm and physical beauty. Among all gods, he was recognized as the wisest. He is also known for being an arbiter of disputes because he tended to settle feuds among gods and men.

Loki’s betrayal was the reason for Baldur’s death, and this was one of the central stories of Norse mythology. Baldur’s death was not lamented only by the gods but by humans as well. His demise precipitated Loki’s imprisonment and helped set in motion the events of Ragnarök, the end of days.

The etymology of the name “Baldur” was initially believed to come from an Old Norse word, Baldr, meaning “bold,” or “brave.” Modern scholars have suggested that the name was rooted in the proto Indo-European word bhel-, meaning “white.” Words for “white” were commonly used to describe Baldur and other Norse deities. Such words were often translated as “bright” or “shining,” as their meaning referred not only to the color, but to the god’s associated qualities like brilliance, beauty, and clarity as well.

His main attributes and what he was most recognized for was his fairness, beauty, and likeability. Baldur owned a great ship named Hringhorni (meaning “ship with a circle on its stem,”), which was said to be the greatest ship that ever existed. After his death, the boat was turned into a massive funeral pyre for his body and set to drift downriver.

Baldur was born as the son of Odin, who was the king of the Aesir and highest of all gods, and Frigg, the queen and a goddess of wisdom who owned the power of foresight. His brother was Hodr, as well as several half-brothers from his father’s side. Some of his half-brothers were Thor, Vidarr, Tyr, Heimdall, Hermod, and Bragi. He had another half-brother, Váli, was conceived by Odin and the giantess Rindr after Baldur’s death, and his purpose was to avenge him.

Baldur’s wife was Nanna, and he had a son with her named, Forseti, a god associated with peace and justice. After he was mature enough, Forseti established a hall for himself called Glitnir, where he, like his father, settled grievances and reconciled foes.

The Death of Baldur and Onset of Ragnarök

The story of how Baldur died was probably one of the most famous and most critical myths in Norse society. It is recognized as one of the only myths to feature Baldur as an active character. This story was told over and over, and its many details came from a variety of sources.

The story begins with the night when Baldur had a nightmare in which he foresaw his death. When his mother, his mother Frigg, had the same dream, which according to the Norse, was an ominous sign that contained glimpses of things that were to happen, the gods decided to take actions. Mounting Sleipnir, the eight-legged horse, Odin went to Hel, a realm of the dead, searching for an oracle that could decipher these portentous dreams.

In Hel, Odin discovered a deceased völva—a wielder of seidr, the magical art through which practitioners divined the future. Using his magic, Odin brought her from the dead. However, things did not go as planned. The völva, unsatisfied from the fact that she was being roused from her death slumber, resisted Odin’s interrogation. But Odin continued and ultimately earned several hints and glimpses of what was to come from the reluctant völva. She foretold that Baldur would indeed die, without specifying how.

Frigg was devastated when she heard the news. Determined to prevent her son’s death, Frigg visited all the living things and inert within creation, asking them to promise her never to harm her son.

After he discovered about Baldur’s immunity to harm, Loki, a trickster who delighted in the misfortunes of others, decided to take things in his own hands. He took the form of a woman and inquired of Frigg whether all things had sworn oaths. Without the knowledge of the woman’s true identity, Frigg admitted that she had not demanded the pledge from a humble sprig of mistletoe. Seizing this news cheerfully, Loki rushed off to find the mistletoe and urge it to harm. When he returned to the gods, they were hurling missiles at Baldur and making 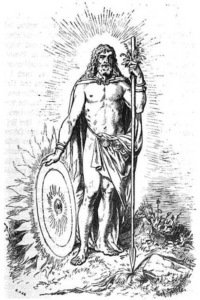 sporting fun of his immunity. Loki used Hodr, Baldur’s blind brother, to do the dirty work for him. Under orders from Loki, Hodr hurled the spear at Baldur that was fatal for him.

Devastated, Frigg asked for a volunteer to visit the realm of the dead and beg Hel, goddess of the dead, to bring Baldur back. Hermod, Frigg’s son and Baldur’s brother, was the bravest who offered to go. Riding Sleipnir, his travel lasted for nine days and nine nights until finally, he arrived in Hel’s halls. Claiming that the fallen god was the most beloved being in all creation, Hermod asked the goddess of death to release Baldur. She eventually agreed to Baldur’s release, but only if all things weep for him.

After Hermod returned with the news, the whole Aesir quickly began sending messengers out to spread the word. They went to all humans and animals, trees and plants, and even inanimate objects such as rocks and stones. They all wept for Baldur. The gods almost managed to elicit tears from every last entity in existence when they found an old giantess named Thökk (actually a disguised Loki) in a remote cave. Of all the things existing, Thökk alone refused to cry for Baldur, and in so doing, doomed the fallen god to Hell.