Being very ancient reptiles, snakes have fascinated and frightened humans for thousands of years. They have been powerful symbols, present in thousands of stories, from the holy writings to today’s modern narratives. We have written a small snake tattoo dictionary for you that explains the meanings behind different versions of snake tattoo designs. Read on and let yourself be charmed by the mysterious appearance of this fascinating reptile!

Some tattoos have a more than mythical scope. It is sometimes taking their source from various religions and old beliefs. Therefore, it is quite common to attribute to them more or less diverse and sometimes very mixed meanings. This is particularly the case with the snake tattoo. Indeed, this is powerful symbolism. In tattooing or other areas, the snake has a powerful meaning… So strong that it can be confusing!

If you’re still hesitating to get a serpent tattoo, we suggest you visit the temporary snake tattoo collection of The Vipers House.

Represented together, the dragon and the snake symbolize balance. While dragons represent savagery and passion, snakes symbolize the calm and meticulous side of nature. 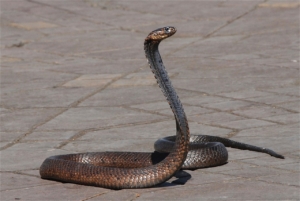 Supposed to protect snake charmers from the attacks of these reptiles, the royal cobra tattoo is considered a holy symbol that represents nobility and good financial health.

This tattoo drawing shows a snake in the shape of a ring, eating its tail. This ancient Asian motif represents the cycle of life, including birth and death.

Honored by the Aztecs, Mayans, and native tribes of Central America, the rattlesnake, in the form of a tattoo drawing, represents the hidden strength and immortal spirit of the loser.

Represented together, the rose and the snake, in the form of a tattoo, are the ultimate symbol of temptation. They also represent the loss of innocence and beauty.

6. Skull and Crossbones and the Serpent

A strong symbol of death and decadence, the tattoo drawing showing a skull and crossbones and a snake is a reminder of the mortality of the Human.

If you want to convey a message of death, risk, or danger, a snake tattoo may be suitable. However, any snake design would not be enough to produce the effect you are looking for. The idea through such a tattoo would be to express anger and aggression. So you have to make the dark side of the snake visible. So get a snake tattoo with the hooks visible, and if possible, the forked tongue sticking out. As for whether to represent it in a grand or minimalist way, it’s up to you.

Another trip to ancient Greece, to understand the meaning of another form of snake tattoo. In Greek mythology, Asclepius is often represented by a stick around which two snakes are coiled. As you may have guessed, Asclepius is indeed the god of medicine and healing. Moreover, the winding of two snakes is reminiscent of the helix, a form of DNA, a primordial element of human biology. So if you are a woman of science or health, you can try these snake tattoo designs! Two snakes embraced with a minimalist tattoo in your neck or on your hand, for example, what do you say?

Snakes are powerful forces of nature that symbolize man’s primary desires and instincts, but also obstacles to our spirituality. While some snake tattoo designs symbolize mortality and demon temptation, others represent noble principles and the strength of resilience.

If you like these reptiles, I suggest you go and see this magnificent collection of snake rings.