Tattooing is an ancient practice that was done all around the world. In the Middle East and North Africa, it is often only seen among the Bedouin and Amazigh people (women especially) that are both nomadic.

Usually, the original purposes of those tattoos are often protective as an amulet permanently worn on the body, and it is considered the mark of beauty. Islam explicitly forbids tattoos, so it is not that common among the rest of the Middle Eastern and North African populations.

The tattoo art is an ancient art, and it dates back to the pre-Islamic era. The Berbers and Bedouin tribes have given us, maybe, the most well-known examples of tattooing; however, the practice originates from the ancient Egyptian times, at least. American tribal belly dance groups have popularized this look with costuming tattoos too.

For those that are interested in replacing these designs for performance, or simply discover more information on the cultural practices, here we will take a look on North African and Middle Eastern tattoos, particularly why do Bedouin women have facial tattoos.

“Jedwel” is a Berber word which means tattoo, which can translate as “talisman.” Girls had to wear tattoos, according to traditions, in order to mark the phases of their lives. The first phase is the one in the chin markings. “Siyala,” like they called them, were usually tattooed from the lip to the chin in a form which represented a palm tree and seeds. Then, the second phase has been marked between the brows to later expand up to the forehead. It has been a lucky charm. Then, the markings continued down to the throat to the abdomen.

A lot of people are curious as to why the Bedouin women are wearing tattoos so boldly across their faces and what is their symbolism.

The tattoo art faced an enormous decline from the 1930s onwards, and in today’s modern world, it is rare to see the striking face of a tattooed Bedouin woman in Jordan and also in the Middle East. Although in ancient times Bedouin women tattooed themselves all over their bodies, such as wrists, breasts, ankles, and thighs, facial tattoos were one of the most important because they were visible to the public.

The locations of tattoos were on a few important spots on the face, such as dot symbols between or above the eyebrows, on the nose, beauty spots on the cheek, as well as lines and symbols below the lip and the chin.

Traditional Middle Eastern tattoos are done by a rudimentary method of pricking the skin and then rubbing in a mixture of smoke black of indigo. The milk of mothers was utilized in the mixture too, in order to give an esoteric benefit. Designs were also a combination of tribal identification and amulets to ward off evil or incur blessings. Some similar motifs were also present in carpet designs.

For example, a vertical line marked along the chin signified an engagement. When there was some mark on the tip of the nose, it may be a sign of marriage or that a child died. This has been their way of protecting the spirit of that child. 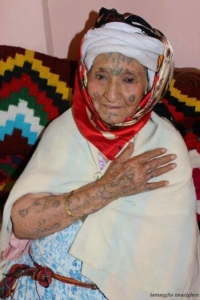 Facial tattooing, particularly, went out of favor in modern times. Often only older Bedouin women can be seen with tattoos on their chin and forehead. And the reason for this is that body art marking, which is called Iousham in Arabic and ahetjam in Tamazight, are no longer considered to be a pious Muslim practice. As a result of that, just a small number of young women are going to carry these tattoos. At one point, such tattoos were tribal markings of beauty and status, symbols which people borrowed from the complicated designs in the rugs. Nowadays, most of the Amazigh women consider these tattoos to be a shameful reminder of the pagan practice they had in their past.

In the past, in Iran, the upper-class women were tattooed with beard-like patters. The practice also passed away, but according to some reports, the demand for tattoos among the Iranian, as well as other Middle Eastern women has exploded. However, those Iranians that have tattoos must keep them under wraps because of the authorities.

Despite the traditions of tattooing for several tribal groups in the Middle Eastern women, their religion, Islam, forbids tattooing. Non-permanent skin decoration in the Arab world, using henna decorations, is actually quite popular over the region.

Facial tattoos were utilized to identify the tribe which one belongs to and as a deterrent for unwanted men. The facial tattoo, or sometimes facial scarring as well, was considered ugly, and therefore made the women less desirable to men outside of the tribal community.

Such tattoos can be usually seen in the form of lines and dots near the corner of the eye or also on the chin, or in the middle of the forehead too. As it was pointed out, something similar was done with Coptic women too, who place the cross on their hands or forehead even though this is not a great deterrent against Muslim or Christian marriages since Muslim men are permitted to marry Christian and Jewish women that are also people of the book and others respect them as such.

For this marriage, there was no need for conversation, and the women are permitted to keep their faith too. The use of tattoos to mark captives and slaves was also present. They were utilized by the Amazigh and Bedouin tribes before this too.

Nowadays, for example, Amazigh women don’t tattoo their faces anymore in Southern Morocco, and it was mostly older women that had these tattoos. Younger women with tattoos are rare nowadays. Some of the middle-aged women even have their tattoos removed, as they say, that now they know that Islam forbids tattooing. They also say that they got their tattoos when they were ignorant of this fact, and they don’t feel embarrassed because of that.

This is the case with women from North African countries too, although they continue the practice with temporary henna tattoos.

The art of tattooing is not new. It