Today we will talk about the tattoo culture of the Middle East, the history of tattooing there, and other things related to Middle East tattoos. Some evidence of the tattooing practice in Southwestern Asia was discovered in 1930. Those were some painted figurines about 6,000 years old, which were found in Tigris-Euphrates Valley. The one who discovered it, named Sir Leonard Woolley, wrote: 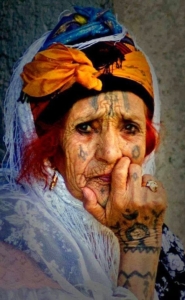 “On the shoulders of all (the figurines), both back and front, there are marks which in the painted figures are in black, the others rendered by small attached lumps of clay; these I take to be coarse tattooing, like cicatrices of some modern tribes of savages.”

A lot of travelers from the 19th century to Southwestern Asia have described Arab tattooing. In 1827, it was written that there were artists in Baghdad. Their profession was to decorate the forms of ladies with the newest patterns or zones, wreaths, and girdles, for the bottom or also the waist. Also, this operation had to occupy a considerable time, a lot of sittings, as an English portrait painter would express it; they have to possess the abundant opportunity for studying, in perfection, the beauties of the female forms.

History of tattoos in the Middle East.

There is just a little information in English about Arab tattooing. One complete work was the Body Marking in Southwestern Asia by Henry Field, which is a survey that includes tattooing, branding, as well as the use of henna and kohl. His information has been collected as a result of his traveling in Egypt, Iran, Syria, the Caucasus, as well as the area around the Persian Gulf. He thought that the tattooing originated as part of religious rituals.

Traditionally tattooing in Southwestern Asia has been practiced by a woman, and the methods were kept secret. Tattooing was also a widespread practice in Iraq during the 1930s. Tattooing was rarely done by the upper class and is despised by city dwellers of the lower classes too.

The oldest mummy, which was discovered to have tattoos, has been found in Europe; it is said that the ancient Egyptians are mostly responsible for spreading the art of tattooing throughout the world. Before tattooing was in vogue among the Egyptians, just high priestesses were tattooed.

One of the oldest Egyptian mummies which had tattoos was the one of Amunet, who is the ancient Egyptian priestess of the goddess Hathor that lived between 2160 and 1994 BCE. She had tattoos that were comprised of dashes and dots in abstract geometrical patterns. It was also common for women like Amunet to get tattooed just for ceremonial purposes early on. However, somewhere by the 3rd and the 4th Egyptian dynasties, tattoos were quite common among other Egyptian people too.

When the pyramids were built, Egypt was quite engaged in trade with Persia, Greece, Arabia, and some other surrounding areas. The traders with whom Egyptians traded admired their tattoos and this art form quickly spread to some other cultures.

But, in the Middle East, it has been mostly only nomadic tribes such as the Bedouins that engaged in tattooing. A lot of Middle Eastern people are Muslim, and the strict Islamic religion view tattooing or carving the body as unholy, just like devout Christians that adhere to the instructions of the Bible to honor the body like a temple.

But, even during the time of the Prophet Mohammed, a sect of Moroccan women and people and people in some parts of North Africa, engaged in tattoo art. Some of the Middle Eastern people of those times who got tattooed did so for decorative purposes. However, it was much more common for people to get tattoos to protect themselves from evil spirits, being the symbol of bravery, or marking some major life milestones.

In the years after the Prophet Mohammed has lived, tattoo art and artists in the Middle East have typically been only seen among nomadic people such as the Bedouins and Amazigh for a lot of centuries. They wore tattoos as protective amulets, tribal signifiers, marks of beauty, as well as to deter unwanted attention from men.

Within a tribal community, those women that had facial tattoos were deemed beautiful. Still, those same tattoos usually made them undesirable to men outside their tribes, thus protecting them from lustful outsiders.

According to some studies from recently, it is shown that the practice of tattooing has been popular in Iran historically, even though the timeline is a bit hazy. Iranian women would also get beautiful tattoos of flowers, birds, and some other natural elements to enhance their beauty. Tattoos under the breasts and on the lower abdomen, in particular, were said to enhance the sex appeal of a woman. Iranian men would also get tattoos that illustrated their masculinity and strengths; sometimes, their tattoos were images, but verses from poems were also quite popular.

Since the tattoo culture is entirely underground in the Middle East, finding a sanitary tattoo shop can be a huge challenge. The best would be to choose a symbol from this culture or another reminder of your trip to the Middle East, and having it tattooed on you once you get home.