The shamrock is, probably, the most easily recognizable symbol of Ireland. Also known as a ‘lucky clover,’ the shamrock symbolizes the luck of the Irish. It calls to mind the grassy slopes of its country of origin and the soulful yet optimistic nature of the people that live there. These tattoos stand for a perfect symbol of that unique and beloved cultural identity in Ireland. 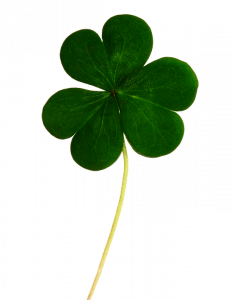 For other people around the world, this image is the most familiar in the form of a bit cartoonish, bright, bold, Kelly green clover. Understandably, though these clover tattoo designs might seem incredible to some people, they aren’t for everyone’s taste. However, shamrock tattoos are more than just this popular image since there’s a lot more to them. For instance, these tattoo designs are often done in Celtic style, filled in with the classic triple spiral or Celtic network. Alternatively, the actual design can form the center of a Celtic cross, or Celtic designs fill it in.

Any way you choose to depict it, though, this is a symbol of luck. Furthermore, these tattoos have a dual function; for instance, they promise the wearer good luck in all of his or her pursuits, while also being a subtle yet easily recognizable nod to one’s Irish heritage. Because they can be done as quite a small design, these tattoos are quite versatile and comfortable to wear. They can go almost at any position of the body, like on an ankle, shoulder, lower back, or even on the hand or foot, though the latter can sometimes be problematic tattoo because of color migration. Besides this, a tiny one on the hand or foot can be very chic.

The word itself comes from the Irish word seamrog or seamairog, which means a little clover. There are lots of different varieties of clover, several thousand. Before the Christians arrived in Ireland, the motif was considered sacred to the Irish Druids because the three leaves formed a triad. In Celtic art, the tri-spiral was very common, and the number three was thought to have magical powers. There is even a tradition of wearing Shamrock on Saint Patrick’s Day that can be traced back to Ireland to the early 1700s. Furthermore, sometimes for good luck, a Shamrock is usually included in the bouquet of an Irish bride, and also in the boutonniere of the groom.

If you ever decide to get one of the shamrock tattoo designs, you must know what precisely the symbolism behind this image is. Going back in time, we can see that shamrocks have been used since Victorian times as a popular pattern for items such as clothing and decorations, and the shamrock is reported to have medicinal uses as well. Besides, shamrocks are considered to be the most significant symbols of luck throughout the world, with many people equating a shamrock to other lucky images such as horseshoes and crossed fingers.

This plant can also have both a religious connotation and a political one. Catholics use this image in the form of representation of St. Patrick, and his saint’s day, March 17. The soldiers of the Royal Irish Regiment even wore a sprig of shamrock on this day, since the shamrock was their emblem. This emblem was decreed by Queen Victoria a century ago in recognition of those Irish soldiers who fought in the Boer War.

There are many different styles and designs of shamrock tattoos available for you to choose from, no matter whether you would like to get one done from flash art or have a tattoo designed just for you. The popularity of this design as an Irish symbol, as well as one of good luck, means that many people decide to get this foliage tattoo. Both women and men can be seen sporting a shamrock tat, placed in a variety of spots all over the body.

Unlike many tattoos, which can be seen in either black and white or color, almost all of these tattoo designs are done with bright colored ink. The reason why is because the color green is almost as important as the image of the shamrock itself. Green represents “the” color of Ireland, and a non-green shamrock would not have the same impact as a colorfully inked one. Beyond this one consistency, a shamrock tattoo can be done in almost any style, including:

It is also possible to have this kind of a tattoo inked as part of a larger piece. For example, the flag of Montreal includes a shamrock in its design (as a representation of one of the city’s most significant populations at the time it was created). Or, you could use the shamrock as just part of a collage of “luck” symbols, including a horseshoe, heart, shamrock, and whatever else is lucky to you.