The Celtic cross, which is sometimes also known as the wheel cross or the ring cross, which starts appearing during the fifth century C.E. It is a symbol of Christianity these days. However, it may have probably been delivered from much earlier pagan wheel symbols for the Sun.

Even though it is most commonly used to mark gravestones in Ireland and Scotland, it was once used throughout Scandinavia, where it has been erected at sites of violence or accident, and in front of farmhouses too. Unluckily, it has been adopted by the neo-Nazi and white supremacist movements, which include the Ku Klux Klan. 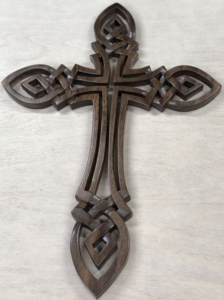 Tattoos of Celtic cross are one of the most famous and highly demanding tattoos in Celtic designs among tattoo lovers. Such types of tattoo designs can be depicted as a Celtic cross on its own or with some other elements or symbols.

Although it is a popular symbol of faith, it can also represent Celtic heritage. This symbol has been quite popular in Celtic communities like Scotland and Ireland. Nowadays, this cross is used to symbolize Christianity, as well as religion.

All Celtic symbols, including the Celtic cross too, originated from the Book of Kells. Artistic monks have created this illuminating book after 500 AD. These also illustrated manuscripts, as well as Celtic art, stood the test of the time. Nowadays, it is the most popular tattoo art design all over the world.

The know work and spirals appeared in Celtic art, and they have no beginning or end. The spirals and the circular lines never cross one another. The meaning of this type of Celtic patters is the circle of life. It is a never-ending circle of life.

Some of the meanings which are associated with the Celtic cross are the following: