The Claddagh ring is an Irish symbol that signifies love and friendship and loyalty. Irish Claddagh is made of two hands, a heart and a crown – the two hands for companionship, the heart is for love, and the crown represents loyalty.

This symbol may also have originated as an identifiable marking for the sails of boats at that place. Still, it probably came to be used on a regular basis as a betrothal ring, which was probably invented in 1689 by a native Galway jeweler that was captured by the pirates but who also returned safely to his real love after five years away. 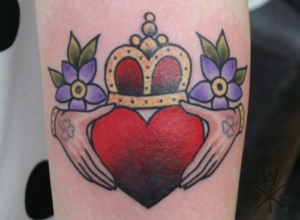 Alternatively, this ring was probably brought back from the Crusades by one young man who was captured by the Saracens. While the origin of this symbol is probably lost to time, the meaning is quite clear. It is a package of friendship, loyalty, as well as love and a message that the bearer is ‘spoken for.’

There are a few legends that explain the beginnings of the Claddagh symbol. A lot of the credit a silversmith from Galway in the 1700s, named Richard Joyce, with creating the first Claddagh ring.

As we already mentioned, the Claddagh is a collage of elements that represent love, and that is the reason why the ring is often considered the traditional Irish engagement, as well as a wedding ring. This same ring can also be worn in several different ways to represent your current relationship status.

When it is worn on the right hand, with the bottom of the heart facing outward, the wearer is single, and he or she is looking for love. However, if it faces in the opposite direction, it means that the wearer is in a relationship.

There are a lot of tattoos that a person can choose to celebrate if he or she has Irish heritage. For example, some of the most common are Irish flags, Celtic knots, and crosses, as well as shamrocks and Claddagh motifs among them. Your tattoo artist is going to work with you to create a design that is going to incorporate the meaningful elements which you like to while also making sure that it works on your body type too.

As we already mentioned, the hands from this symbol represent trust and friendship, while the heart stands for love. And, lastly, the crown is a symbol of loyalty and fidelity.

As we already mentioned, the Claddagh tattoo is composed of a heart that is surrounded by two hands and topped by a crown. However, you should not mistake them with the sacred heart tattoos, as they are not religious at all. They are inspired by the Claddagh ring from the 18th century.

Indeed, Claddagh tattoos are among the first love symbols, which are coveted for the matching tattoos and wedding ring tattoos or one couple. However, they also became a symbol of Irish pride, an icon of the Celtic heritage of people all over the world. They became a part of the composition with shamrocks and Celtic elements like knots or crosses.

When it comes to tattooing, the circular shape that the ring has can be drawn into the design too, and it stands for eternity.

Sometimes, you can also see this design depicted without the crown. This is a less popular version of the design, which is called a Fenian Claddagh ring. Sometimes the Claddagh is accompanied by a cross, which will represent faith.

Generally, these tattoos are a beautiful message of peace, beautiful and everlasting friendship, as well as real and eternal love. So, you should let love and friendship reign.

For example, for guys that have a soft side for romance, nothing is going to beat the interlaced magic of this ink. The symbol showcases deep bonds of the heart, and its forcefully sentimental effect was around for centuries.

The kingly crown is exceedingly masculine, which the heart is round and feminine. In that way, this is a clever personal display for showing off a connection to both your male, as well as female sides.

So, the Claddagh has a lot of important meanings, and all of them are wrapped up into one pretty design.

And, if you want to celebrate this amazing bond that you have, either with a person that is from your family or someone else, you can find great inspiration with these Claddagh tattoos.

This tattoo design has gained an offbeat status in the world of tattoos. Claddagh heart tattoos, Claddagh ring tattoos and others of this type are designs not only worn by Irish people, but also by those that are not Irish.