Originally, the Celts people were a diverse group of tribes that were stretching from Ireland in the west to Scotland in the north, as well as to modern Turkey in the east and the Iberian Peninsula in the south. The ancient Celtic people had a complex, as well as a polytheistic religion, which emphasized the power of nature and all of its components. Eventually, a lot of them fused their ancient belief with the practices and symbolism of Christianity.

The Celts flourished from 500 BC to 4000 AD and were later reduced in numbers, as well as geographic spread by both the Roman expansion and German immigration. The rich Iron Age culture that they had continues to influence the art and culture of the modern world. Among some of the most used Celtic symbols were those based on animal forms, which include bird symbols. 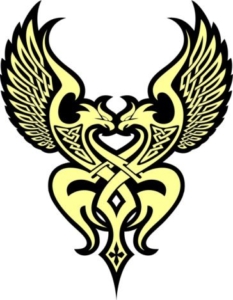 Created in the Monastery of Lindisfarne, on Holy Island, just off the northeast coast of England, the Lindisfarne Gospels date from about C.E. 698, and they are a rich source of the Celtic artwork. Some illustrated manuscripts like these were created by the monks who showed their devotion by painstakingly copying, as well as illuminating (decorating with a bright color) the Word of God.

The Celtic tattoo designs borrow heavily from these types of manuscripts, and they typically feature the ornate and interwoven animals, as we already mentioned, together with people, and letters that accompany the texts.

Celtic knotwork birds like those that are found in the Lindisfarne Gospels show just enough of the animal (head with a beak and some feathers) to identify it like a bird.

For example, the crane has a remarkable position in Celtic culture. It is believed to be the messenger of the gods and to have a high degree of wisdom. The duck is a migratory bird, which represents the adaptability, as well as instinctual drive, which is necessary for survival. For a long time, the owl has long been associated with the spiritual and the magical. In Celtic symbolism, the owl is a sign of wisdom, keen sight, as well as patience. The sparrow is another Celtic symbol representing memory, remembrance, and ancestral knowledge.