Tamatori hime tattoo art has big historical meanings and symbolism. But before that, we were going to go and take a walk through history.

The Japanese tattoo style has a considerable influence up until today even if its long and glorious history dates back ages ago. It is known that the Japanese tattoo artists began their craft back in the Yayoi period (c. 300 BC–300 AD). Back in those days, Japanese tattoos were connected with spirituality and status symbol, identifying the master from the slave. However, things changed in the Kofun period (300 –600 AD), and tattoos began to have a negative connotation, and since they were used for marking the criminals. 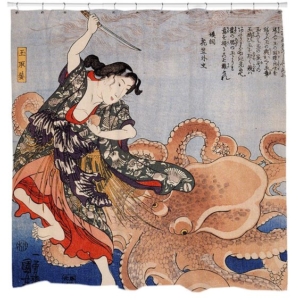 A domestic population of Japan, the Ainus, who have lived in Japan for many years, also used to have tattoos on their body and even in their foreheads occasionally, which primarily influenced Japanese tattoo activity. The critical reason behind this is because they have integrated with and penetrated modern Japanese civilization.

The traditional tattoo images (like Tamatori hime) that are being handed from the past generations include “designs of the floating world” (called ukiyo-e in Japanese). These images are woodblock prints produced by the most influential ukiyo-e artists like Kuniyoshi. Kuniyoshi is also the author of the masterful Suikoden illustration. The story illustrated contained 108 corrupt Chinese rulers who were marked with tattoos. Different gangs used different design motifs and applications. Despite the rich tradition of tattooing, the Japanese people did not widely accept the idea of their bodies having tattoos as much as the western world because tattoos were connected with the yakuza (Japanese mafia) for several years in Japan. The social stigma of the association to criminals of tattoos prevented bearers from entering some fitness centers or hot baths.

The Tamatori hime is the Japanese diving girl who dances with a dragon while brandishing a sword. Unlike Kannon and Benten, she is beautiful but also overtly sexy, sometimes topless but almost always wearing a tight wraparound skirt. She is a pinup girl who has been used in traditional Japanese tattoo to the point that she carries some of the respectability of this ancient art form, illustrated by the likes of Utagawa Kuniyoshi, the same artist who popularized the Suikoden heroes.

The Tamatori hime tattoos are very popular across many countries and many cultures at the same time; however, the meanings and reasons for wearing them are often similar.

The story behind the Tamatori Hime tattoos included dragons, pearls, and a brave woman who nearly sacrificed herself for what she considered as the greater good. Therefore, in most of cases, the designs of this tattoo include images of bravery, the sacrifice of a woman fighting with dragons.

Most of the individuals who decide to get such a tattoo will have it inked mainly or totally on the back as it’s the most significant area that can be tattooed on. The tattoo often starts on the lower back and then can be spread over the back area. If the dragon is included in the design, it can cover the whole of the tattoo or can be the main focal point. Although the dragon in the design has a basic form that is relatively standard in terms of body shape and head design, there is still plenty of space for variation.

Although the original design includes a reasonably basic picture, it is still clear, bright, and looks very powerful. Furthermore, it covers the whole back, shoulder, and almost down the arm as well. The background of the tattoo is also essential but effective; it includes smoke and flame and also indicates movement.

Different focuses could be put on the princess in the Tamatori hime tattoos. She can be represented as swimming or fighting with the dragons. She is often portrayed as an essential focal point and as a heroine figure, almost sacrificing herself for what she believed in.

With the princess come the dragons and various other sea creatures besides. If using some of these aspects, the wearer can show more of the story and can have more designs of nature, bravery, and a gallant fight between the human world and the mythical undersea world. The Japanese are famous for having intricate designs of tattoos that tell stories and have many recognizable features. The wearers then can say much about themselves with these designs, taking aspects from the Tamatori hime tattoo theme and those of others besides. Taking aspects like wisdom and sacrifice from this legend and then blending it with other stories is a perfect way for the wearers to say what they want to say about themselves.

Similar to all the other tattoos, before you get such a tattoo, you need plenty of research done to get the right design and, very importantly, the right tattooist to do the work. Sort out the design of the Tamatori hime tattoo design beforehand.