Alcohol as a symbol in the tattoo culture is capable of standing on its own, and it is an integral part of the man’s ruin tattoo. The particular spirits may vary from some generic pint of beer to a favorite or well-known brand of whiskey. It is equally hard to predict the theme of the design.

The man’s ruin tattoo designs are usually consisting of the many vices which can lead a man astray in life. The three man’s ruins are alcohol, gambling, and woman. The last one of the list – a woman – could also be a bad woman, to be exact. Women are usually surrounded by drinking glasses, bottles of alcohol, playing cards, dice, as well as some other accouterments of gambling, like horseshoes, in order to represent betting on the ponies at the track.

Shortly, “Man’s ruin” could also be titled “Wine, Women, and Song!” To add some additional elements of various modern vices, tattoo artists use their imagination. For example, a woman that is regarded as cruel or malicious. 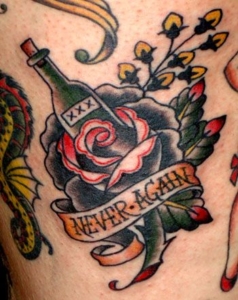 Alcohol can represent some good times, releases, as well as celebration. Just as often, though, tattoo symbolism with alcohol revolves around its addictive aspects. The bottles which hand like an intravenous drip or which possess some demonic personality are all just part of the repertoire.

Whether we revere or revile it, alcohol seems like it is destined to remain a notable feature of tattoo symbolism, and it’s leaving his mark in the traditional and modern tattoo culture for more than 50 years.