Home
Tattoo Meanings
Axis Mundi or The Axis of The World: What Does it Mean?

The “axis of the world” is not a particular symbol, but it is instead a type of symbol which takes a lot of forms. It comes from the worldviews of different ancient peoples, describing how they imagined the physical universe to be arranged – with the heavens above, and the underworld below, a central world which we occupy and a central pole or axis which shoots straight through them all. 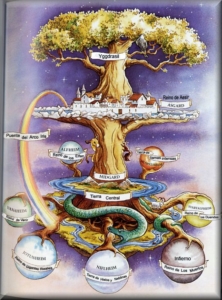 As the celestial pole and the geographical pole as well, the Axis Mundi expresses a point of connection between the sky and the planet Earth where the four compass directions meet.

Since ancient times, a lot of cultures have held the view of their homeland as the center of the world, because it was the center of their known universe. They represented the axis Mundi by different symbols like natural objects, such as a mountain, a tree, a vine, a stalk, a column of smoke or fire, or a product of human manufactures, such as a staff, a tower, a ladder, a staircase, cross and so on. Its proximity to heaven may carry implications that are chiefly religious.

The symbol originates in a natural, as well as universal subconscious perception: that the spot one stands at “the center of the world.” This space also serves as a microcosm of order as it is known and settled. Outside the boundaries of the microcosm lies a foreign realm that represents chaos, death, as well as night.

Also, the tree of life is such a symbol, as is the caduceus, both having central poles around which some other different aspects of the design are arranged in symmetry. It is precisely because humans tend to arrange their views of the cosmos along such lines, such types of symbols appeal to us instinctively and repeatedly appear in tattoo imagery and artwork in general.