Basketball tattoos are considered as the number one choice for tattoos among sports lovers. This is a design with a growing base of fans around the world. Such tattoos allow sports lovers to express their interest or dedication in different ways. At first sight, it appears as there are only a few designs to choose from and just a couple meanings that can be attached to basketball tattoos, but then, in reality, that is not true.

Basketball is one of the most popular sports around the world that speaks to many different people from all types of backgrounds. Anyone can practice this sport as there is little to no equipment aside from the basketball itself while at the same time providing a sense of belonging for those who are part of the team. The tattoos can represent something very intimate to the owner, or it can even represent the people that they have come to know through the sport.

Basketball tattoos are not only for those who play this sport but also for people who are impacted by the game in a significant way.

The most apparent meaning that can be attached to a basketball tattoo is that the owner is proud to reveal to the world that he/she loves the sport. This meaning is usually there no matter what type of design the person decides to get. Very often, this tattoo is chosen by people who play the sport or used to.

It is a common fact that sports serve as a stress reliever, which is also the case with basketball, so some people decide to get their tattoos to represent that aspect of the sport and competition in their lives. Their tattoo is a source of motivation in the most challenging times.

If people have a favorite basketball team, they can decide to get the logo of the team. Such tattoos serve as representations of their fandom and passion for the team. There are a lot of people who consider watching and rooting on their favorite teams as the most important parts of their lives besides their families.

Crowns combined to the top of the basketball design add a sense of regality. This type of basketball tattoo could emphasize the talent of the player or the prestige of the sport, or both. The basketball with a crown on top can be further elaborated with the adding of the phrase “King of the Court,” but even if it is not included, it’s still implied through the crown.

Sometimes people include basketballs in designs to symbolize their childhoods. A lot of people, especially in America, have very dear memories of playing basketball with their families when they were younger, so basketball can be a great addition to these types of designs.

There are countless different ways that basketball tattoos can be designed, incorporating different symbols to represent the individual’s story and personality. For instance, they can be simple designs with just a basketball and a name, or they can be much more lavish with players and crowds. No matter which design you choose, every basketball tattoo can symbolize all of the meanings mentioned above, or you can further customize it to hold new meanings.

When they are designed on their own, basketball tattoos are usually considered as quite simply, using simple line work to show the curvature and eight panels of the ball. In most of the designs, it is done in black lines, allowing the negative space of the design to create the remainder of the image.

If you wish to personalize the tattoos, you can do that by adding a jersey number or number of a favorite player. The number can be placed on the basketball, on the jersey, or even off on the background of the image. If the number stands for a favorite player, the official NBA font is generally chosen to make a more realistic tattoo. Sports enthusiasts even go the extra mile with these types of tattoos and have their numbers sorted in a way that makes them look as if they are stitched onto their skin.

Portraits of basketball players are popular images as well, including either a specific favorite player or the silhouette, often leaping to dunk the ball. It is naturally that particular jerseys are usually included with the image of a player, indicating the team and number. This type of design leaves space for experimenting. For instance, you can ink a large portrait of the favorite player in full color, or include the whole team in a more significant piece. 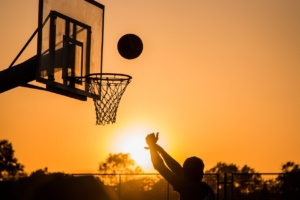 To make a more feminine tattoo, the outline of the ball can be rendered in a heart shape, or a heart shape can be embedded into the ball.

The larger tattoos usually embellish the basketball with flames, wings, or the basket itself. To be sure that you end up with a basketball tattoo that represents who you are, you must know the meanings of each element that you decide to include.

If you wish to indicate the skill of the player, the tattoo can be designed with the ball sweeping through the net. Such tattoos can either have only the hoop included in them or with the player shooting in the background.

When broad wings are added in the design, it gives a more angelic design. The wings produce a sense of liberation that this sport provides for you, relaying the significance of it. To convey the importance of basketball as well as Christian faith, a crucifix can be added to the design.