A gender symbol is said to be the pictogram or glyph, which is utilized to represent either biological sex or sociological gender. Also, the female symbol is used in sociology, gender politics, LGBT subculture, as well as identity politics.

Pictograms that are utilized to indicate male and female public toilets became widely utilized beginning in the 1960s.

Representing two planets, iron, copper, the gender symbols for a male and female, hold a lot of meaning and symbolism in the world. 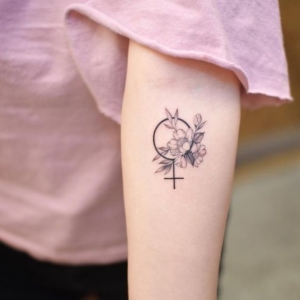 The shape of the Mars symbol was connected to an iron-tipped spear, i.e., a weapon which is mainly utilized by men, and the form of the Venus symbol to a bronze mirror or a distaff, which is connected with women in the past.

The symbols themselves are ancient, and the associations which they make a date back to the dawn of civilization. The ancient cultures, after observing how the movements of heavenly bodies such as the Sun and the planets heralded a corresponding change in events on our planet, came to believe that there was a causal relationship. Logically, then, some ancient scholars started to study the heavens to predict better, or also prepare for the future. They came to associate various heavenly bodies with their powerful gods, Mercury, Venus, Mars, Zeus (Jupiter), and Cronus or Saturn.

Each of the heavenly bodies, together with its god, was associated with some metal. Two popular associations sometimes made with the symbols today say that the symbol for males also represents the shield of Mars. In contrast, the symbol of female represents the mirror of Venus, was rejected by scholars.

Nowadays, they are utilized in scientific publications to indicate the sex of an individual, for instance, of a patient. Pedigree charts published in scientific papers are now more commonly using a square for males and a circle for females.

Since the 1970s, variations of gender symbols were also utilized to express sexual orientation, as well as a political ideology. The first example of this has been the use of the two interlocking male symbols to represent male homosexuality. Since the 2000s, a lot of such variants were introduced in the context of LGBT culture and politics. Some of those symbols were adopted into Unicode, starting with version 4.1 in 2005.

Female – ♀ – is the sex of an organism, or also a part of an organism, which produces non-mobile ova, or better known as egg cells. Barring rare medical conditions, most of the female mammals, which include female humans, have two X chromosomes. Female attributes can vary with some species containing more defined female characteristics. Both genetics, as well as the environment, shape the prenatal development of a female.

A common symbol, which is utilized to represent the female sex, is ♀ a circle with a small cross underneath. According to Schott, the male and female symbols are inspired by the contractions in Greek script of the Greek names of the planets Thouros (Mars) and Phosphoros (Venus). Then, the derivations were traced by Renkama, who illustrated how Greek letters might be transformed into the graphic male and female symbols recognized nowadays.

The Venus symbol (♀) consists of a circle with a small cross below it. It originates in Late Antiquity as an astrological symbol for the planet Venus, associated with the goddess Venus. Therefore, it is an alchemical symbol for copper too.

The modern sign for the female sex is also an ancient sign for the planet Venus, which in turn was connected with the Greek goddesses Aphrodite and Athena. Venus is the planet which was called the Morning Star, although it is not a star. This Morning Star appears alone or together with the Moon. Moreover, it is called the Evening Star, which seems to appear in the sky for the second time, alone or also with the crescent of a New Moon.

They are associated with the Moon and the stars, as well as their cycles, the planet Venus, has been worshiped by almost all peoples and cultures of antiquity, as the goddess of war, fertility, beauty, and love.

In tattoo art, the female symbol also has the same meaning and symbolism, and it is a design that is most commonly inked by females, which is logical. The female symbol can be tattooed on its own or in combination with some other objects and things, such as flowers, letters, or something else.

When combined with a rose, the female symbol becomes a traditional symbol of feminine beauty. The female symbol can also symbolize feminist ideologies and pride in being a woman.