Home
Tattoo Meanings
Castle Tattoo Designs, Symbols Of Our Past And Cultural Heritage.

Castles have been around for many centuries in different parts of the world. They have developed around the ninth century in medieval Europe as a stronghold, generally the residence of the nobility. In heraldry, the castle is a symbol of both grandeur and solidity.

The castle tattoos are easy to recognize, as they are some of the most elaborate designs which you will find being used for body art. While this particular tattoo design can be placed about anywhere on the body, because of its size and intricate details, it is best showcased on the chest, back, thigh, or shoulders. 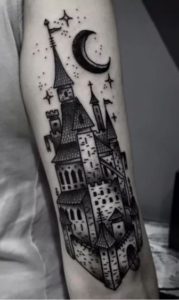 In tattoo art, castles are often incorporated into fantasy and Gothic scenes, creating a tone for a larger tattoo place, setting the scene in some distant period, or maybe dominating some fantastic futuristic landscape. Whether under a cloudy but moonlit night or perched high on some sunlit mountain, the castle tattoo invites us into a story that is already underway.

Castle tattoos, depending on the person that wears them, can depict a lot of meanings which include positive and negative ones too.

As we already mentioned, the castles are around for a lot of centuries, and the early castles were built during the 5th century B.C., with the help of stones. Since then, they remained not only in England but also in the whole of Europe, which depicts protection, power, royalty, as well as strength. Nowadays, these castles are symbols of our past and our cultural heritage.

As far as the castle tattoos are concerned, they can be done in gray, black, and white colors and the different combinations and in several styles too. These tattoos can also be worn both by men and women. So, if castle tattoos intrigue your mind, you should research more about their meaning, as well as the different designs which you can wear with some style and creativity.