All life is touched and stimulated by the moon, particularly dark life. Fauna and flora dance in lunar reels and the wax and wane of the moon enchant it.

Have you ever wondered what symbolic meaning do moon tattoos have? First of all, know that the moon is not only a star. It is a symbol that crosses the history of humanity, from Greek mythology to the urban legends of nowadays. Also, it crosses the history of the Amerindian and Oriental civilizations. This is why it has a lot of meanings, particularly according to the phase it is in.

First of all, the moon is the star of the night, the natural light which illuminates the darkness. Many people believe that the moon holds some magic. 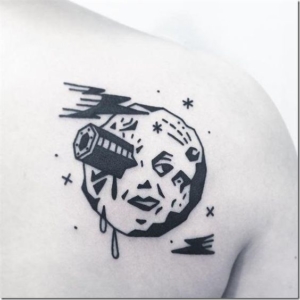 It was a belief for a long time until modern society came. But, some cultures and people still believe that the celestial moon is an excellent source of power and magic.

The moon touches everything and became a strong emblem too. Even as a tattoo, it still has a connection to the unconscious mind, mythology, religion, and time. People from ancient civilizations usually praise the sun and the moon as the greatest sources of magic and power.

Below, we will talk about the moon tattoos, and what do they mean or symbolize. Keep reading and find out.

Astronomers believe that the moon formed about 4.51 billion years ago, not long after our planet. The most widely accepted explanation is that it formed from the debris leftover. This happened after a huge effect between our planet and a Mars-sized body known as Theia.

It is in synchronous rotation with our planet, and because of that, it always shows the same side to Earth. That side actually is the near side. Dark volcanic maria, filling the spaces between the bright ancient crustal highlands and the prominent impact craters, marks this side.

After the sun, the moon is definitely the second-brightest regularly visible celestial object in the sky of our planet. The surface of the moon is dark. However, compared to the night sky, it appears very bright, with a reflectance slightly higher than that of worn asphalt. Its gravitation influence produces the body and ocean tides, and the slight lengthening of the day.

Universally, the moon is the symbol of growth and change. Moreover, it symbolizes the night and passing of time, and it is a very popular image in tattoo art. As a result of its cycle of renewal and regular phases, the moon links with feminine aspects. Such aspects are nurturing receptivity and life rhythms.

In tattoos, artists sometimes show it realistically, in a crescent form, for example. However, other times, it has a face and a nightcap. Sometimes, it is the color of cheese, while other times a combination of deep and color blues.

These tattoos are excellent for people who believe in higher powers, astronomy or who simply like whimsical tattoos. Usually, people connect their tattoos with their personalities, stories, and beliefs. So, what does getting a lunar tattoo mean?

Moon tattoos have a huge variety of meanings. You can pair them with any other element or symbol in order to make their meaning wealthier. However, they can also stand on their own.

Although there are a lot of meanings associated with lunar tattoos, the most common ones are:

There are a lot of other meanings associated with lunar tattoos. But, what it actually means could be very different from one individual to another. A lot of tattoo enthusiasts utilize body art as a means of self-expression. Because of that, their tattoos can have a connection with their stories, personalities, or beliefs.

This is a life alarming symbol. It constantly changes; therefore, it reminds us of the consistency of all life. Moreover, it is symbolic of the cyclical nature of time – even karma. Life is moving in non-linear terms, and we all know that karma is a big circle. The moon in her various phases will remind us of this kind of infinite process of recycling, as well as regeneration.

If you are considering this tattoo design, know that there are many different variations possible. As the moon is waxing and waning over the course of the lunar cycle, you can first decide which phase you would like to tattoo. From there, you can think about the colors you would like to use and the size of your tattoo. And, after that, you can finally make your appointment with your artist.