Celtic dog (and other animals)  were portrayed in Celtic tribal life in a big, interesting, and very imaginative way centuries ago. Animals were also featured in Celtic jewelry tapestries, carvings, clothing, and so on, to express deep and profound meaning.

Why? As the ancient Celts recognized significant energy, as well as magic in the animal kingdom. Celtic animals as symbols hold incredible power and fascination for every one of us. They keep our attention as animals serve as reminders of qualities, such as strength, courage, patience, etc. which every one of us wants to have.

Such an animal is the Celtic dog. A lot of Celtic myths contain some references to dogs, but just like cats, their roles are ambivalent. Celtic history also includes some treasure trove of dog stories, real, as well as magical ones. 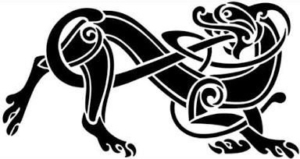 Dogs or dog familiars – spirits embodied in an animal and believed to attend, as well as serve or guard a person – belonged to the heroic figures and the gods too. Their owners would sometimes engage in wars over these animals.

In a more negative characterization, though, animal spirits were also thought to be shape-shifters, which had the ability to change form at will.

“Every animal has his or her story, his or her thoughts, daydreams, and interests. All feel joy and love, pain, and fear, as we now know beyond any shadow of a doubt. All deserve that the human-animal affords them the respect of being cared for with great consideration for those interests or left in peace.” Ingrid Newkirk

Dogs were also considered as magical healers, and they were kept as familiars by gods, goddesses, as well as healers of both genders.

Your Irish heritage or your love for Celtic knot design could inspire you to choose a Celtic dog as your next tattoo design. No matter if you choose a solitary symbol or woven into an elaborate full sleeve, you will get some more than a friendly mutt with this highly stylized ink.