The deer is an animal that held a special meaning for the Celtic culture. They believed that the deer is part of the fairy world and had magical powers. It is a prominent animal in the bestiary of Celtic art, as well as Celtic tattoo art.

Considered as the oldest creature in existence (In Celtic mythology), the deer is an animal which is presented in the complex interlocked from typical of Celtic art. It was also the principle animal that was haunted by the Celts for food, and in images, it has been combined with their gods in both male or stag (Cernunnos) and female or doe (Saba, Flidais) form.

In Celtic mythology, the appearance of a white stag from the Otherworld was a sign that a profound change has been about to take place, while a normal stag could lead souls through the dark forests. Celts believed that deer lived deep in the forest so that it can have some secret knowledge.

Being one of the oldest animals in existence (In Celtic mythology), it was also a symbol of life, fertility, as well as vitality. Their antlers were the symbol of the tree of life. 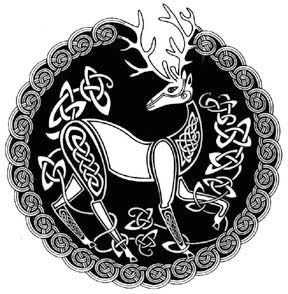 Does and stags represent different elements. An image of a doe is closely connected with gentleness, kindness, as well as motherhood, while a stag is a virile, lustful, and fertile animal. Generally, some of the symbolic meanings that the Celtic deer has are:

The Celts also believed that the white stag was the messenger of the gods. Every time a white stag was seen, it was thought that some important things would soon follow. There is evidence of this in some legends of King Arthur in which the appearance of the white stag sent the knights off on spiritual quests.

The lives of Celts were interwoven with nature and animals. They have several animal gods, which include Cernunnos, the Lord of the Animals, as well as the God of the Hunt.