Tattoos became a staple piece of modern culture, and every person in the world has at least one small tattoo, for example, a fairy tattoo. People are usually much divided between those that adore them, as well as those that cannot stand them; however, the number of the latter ones drastically decreases.

Tattoos do not have to be large and take up our whole body. There are a lot of designs and skilled tattoo artists that are going to make a perfect tattoo design for our liking.

In the past, tattoos have been utilized as markings for different members of a tribe, and their leaders so that people may recognize themselves in the crowd.

However, later they became the symbol of the lower class citizens too, and just sailors, or criminals, as well as people that had restless lives, were those with tattoos. 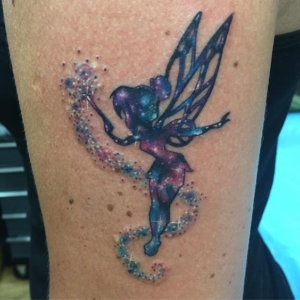 This is a popular opinion which slowly fades away, and people are embracing tattoos now more than ever before. They have become almost a fashion statement, and every person in the world likes wearing them on their bodies. One bad thing about tattoos is that they are permanent, meaning they stay with us for our whole life. With this, we would like to say that if you get something stupid tattooed on your body, it will follow you your whole life, unless you decide to go under laser removal, which is quite painful and even expensive.

There are a lot of different designs, as well as ideas for tattoos, so choosing the right one can sometimes be hard. Here, we will talk about the symbolism and meaning of the fairy tattoo. So, if you are one of those that plan to get a fairy tattoo, continue reading and find out something more about them.

Fairies belong to the mythical creatures. They are mythological women or girls of unusual beauty, as well as power and endowed. They are also described as young girls that live forever and have lush hair, usually dressed in a long white, airy dress. They are said to live underground or near old hills, springs or caves.

The folk traditions usually differ from the good fairies that are helping people and the evil fairies who are trying to harm them. However, the distinction between these two groups is sometimes quite vague.

For example, in medieval Europe, fairies represented women that possess magical powers, and after hundreds of years later, the same word stated to be used for elves. The image of fairies with twin wings appeared somewhere at the end of the 18th century. Both the expressions represent little people of fields and forests.

There are fairies that are small, while others are tall, and they may sometimes have a human appearance. In some stories of good fairies, they bring happiness and also help, although they usually do so under several conditions.

Nowadays, every time we think of the word fairy, images of Thumbelina, Tinkerbell, and Pan’s Labyrinth spring to our mind, but the legends about fairies were around since the days of the Celts. The word fairy has its origins from the Latin word ‘fata,’ meaning fate, and originally it referred to any other magical being from the land of Faes, which included elves, gnomes, as well as trolls.

Fairy tattoos make excellent tattoos as they are pretty, as well as delicate to look at. They are quite popular among females as fairies represent mystery and beauty. They are much more sensual and sexual in comparison to angels, which gives them a very separate, as well as intriguing identity. They are also colorful and vibrant, and that adds a charm to the person that wears it.

However, fairies weren’t always the sweet and little creatures that did the good stuff. There were a lot of them that played tricks on others too. Fairy tattoos may thus interpret different symbols, as well as meaning, and all of them depend on the way they were portrayed.

Usually, tattoos of fairies are brightly colored, as well as famous among women, as they more readily connect with the meaning and symbolism of their artwork.

According to folklore, fairies are magical creatures, and they embody some of the following meanings:

Sometimes, fairy tattoo designs may include pop culture elements. It is not uncommon to find a fairy which resembles an alien, or one which is dressed in the costume of a naughty nurse, or a fairy that has a Cupid tattoo design.

All of them have their meanings. Choosing the right tattoo design is quite tricky, so it will be best to take your time and think about that before you decide what tattoo design you want. If you choose this one, you will not regret it, because it has a lot of beautiful meanings.