Even though they are less common for the people that live inland, crab tattoos are not so unusual for people that live in and around coastal areas to get. The associations of the crab with the ocean and the livelihood which provides for a lot of people that live along the shore make it a potent symbol of wealth, the adventure of the sea, and renewal too.

Additionally to this, the place of the crab as the fourth sign of the Zodiac, representing the sign of Cancer, imparts additional meaning for a lot of people, making this tattoo an excellent idea for numerous people contemplating their following ink. 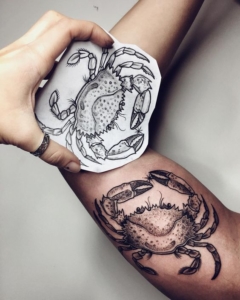 As we already mentioned, this is a symbol for the Zodiac sign of Cancer. Still, it was also utilized as a metaphor for negative behavior – owing no doubt to its intimidating appearance – as well as a metaphor for the sea and also the abundant life there.

In a lot of different cultures, as well as periods, this symbol plays various roles in mythology, both significant and not so significant, and is also utilized in rain ceremonies, since it is a water creature.

For example, for the Cambodians, it represents good luck, while for the Chinese people, the crab was once thought crafty as of its sideways walk. The different species, as well as their brilliant yellow to red tones, and also their use in cool blue seascapes made them well situated to tattoo art, alone or also in combination with some other creatures from the sea.

Within animal symbolism, the crab has strong lunar connections, and it represents renewal and rebirth. The crab, and sometimes some other shellfish, is featured on the Moon card in Tarot, and the shedding of the shell of the crab is akin to the own lunar phases of the moon. It is this act of shedding which makes the crab symbolic of renewal and rebirth, and also the cyclical nature of life. Additionally to this, the connection that the crab has with the moon also connects it to the feminine: the moon serves as a motherly guide to this animal while it resides in the depths of the mysterious ocean.

All over the world, the crab holds some specific meaning in different mythologies and cultures. For example, Chinese people see the crab as a symbol of good luck, virility, and also masculine potency: when they eat it, it is believed that it nourishes the semen of a man.

Crabs were also seen in some other ancient cultures. For instance, ancient Peruvian pottery features some paintings of a half-human and half-crab rainforest deity, and the representations of the crab on other Peruvian clay vessels indicate the general prominence of ocean creatures as deities in this ancient culture.

In addition to this, crabs are also present in the creation mythos of some African cultures, as well as the Nootka culture of the Pacific Northwest.

As we already mentioned, this is symbolic of the Cancer sign of the Zodiac, and their characteristics are loyalty, contradiction, and lovers of domestic life. People who are born under the Cancer sign are good friends, but they also need their own space, as well as solitude time, so they tend to be interested in history, the beginning of all things, as well as hobbies like heraldry and genealogy.

However, the potential meanings for crab tattoos are seemingly endless: with a place in a lot of ancient cultures, and also powerful modern meanings, crabs are deeply symbolic animals. Here are some of the primary meanings of this tattoo:

Being symbolic of protection, because of its hard exterior shell, and a fighter with its dangerous pincers is the reason why the crab is often the token tattoo chosen by sailors and fishers. Life on the water can sometimes be hard, so a person has to be hard in order to survive, just like this animal.

As a result of its different meanings and symbolism, getting a unique and beautiful crab tattoo is not going to be difficult: there are a lot of symbolic designs to choose from, or a person can devise his or her own.

However, regardless of the reason, these tattoos may hold so much meaning to the person that displays it. Whether it would be to represent their life on water or masculinity, or even rebirth that they experienced, it is an excellent option to make a permanent part of their body.