Moon tattoo is for every person that believes in the powers, as well as the influence of the celestial powers, and appreciates the science of astronomy. Moons are profoundly symbolic images on their own, but the meaning behind them can increase when they are paired with some other symbols, such as the sun or also a wolf.

Such paired and multifaceted designs often look beautiful and interesting. Moons are an excellent tattoo to get if you are not a lover of big and detailed tattoos, but small and discreet ones, though they may easily be adapted to fit a larger space, either represented on their own or as part of some scene.

Today, we are going to talk about crescent moon tattoos and the meaning beyond them. 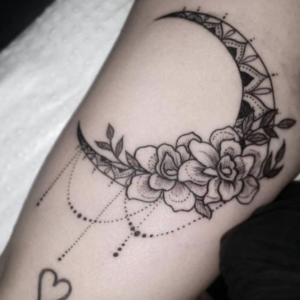 Celestial moon tattoos are magical, as well as enhancing choice for anyone that wants to ink the influences of the unconscious mind, time, religion, or also mythology.

The crescent is one shape that best characterizes the phase of the moon and is the most frequent symbol for it. Because of the cyclical and changing nature of the moon, it, in turn, is symbolic of the female, of transformation, a well as of fertility in a lot of different cultures, and it was associated with such female gods as Artemis.

Crescent moon is also called half moon, so half-moon tattoos are an attractive design idea for those that follow the waxing and waning of the moon, or who also worship goddesses while paying homage to the stars, as well as astrology.

It is often depicted with the sun in a celestial design to represent the day, as well as the night, or the powerful union of alpha and omega.

There are different associations and meanings behind moon tattoos, and the personal meaning is going to vary depending on the bearer of the tattoo itself.

Having a crescent moon tattoo may symbolize several different things. When the moon is in the waning crescent phase, it will signify the expulsion of negative energy from the person’s personal, spiritual or also work-life: he or she is ridding himself or herself of the people, or also the thing which no longer serves him or her or which are harmful to them. When it is in its waxing crescent phase, it will symbolize creativity and growth.

The small shape of the crescent moon makes it an excellent tattoo for a complicated placement inside the wrist, on the ankle, or also behind the ear. The simplest design is the crescent moon itself, either outlined in black or filled in. If you want to be more creative, as well as your tattoo to be more personal, you can design the moon so that it is made up of some other shapes or symbols like stars, butterflies, wolfs, sun, and so on, for an especially feminine or masculine touch.

While we usually envision the moon as yellow or white, using such symbols to make it up more attractive will be an excellent way to add some color to the design, like vibrant blues, pinks, or purples.

Moreover, you may give your tattoo a bit more personality by including a facial profile in the half-moon. This may create a sense of whimsy, and personify the moon to represent your own beliefs in the powers and purpose of the moon. As it is most commonly connected with the feminine, you may want to make your moon female, with a caring or also nurturing disposition. The moon is often connected with mania, and depicting it as crazed or also wild, may inject this meaning in your tattoo design.

Regardless of your living place in the world, you can appreciate the beauty of the moon. Enlightening and captivating, the moon has a lot of associations in its physical form.

Darkness aside, the moon is often seen as a female symbol, and it may be connected with the Goddess Isis. For Mother Earth, the moon follows the natural curve of a body and breasts of a woman, and it is believed to be associated with menstrual cycles and birth too.

Moons have a lot of meanings, both on their own, as well as when paired with some other images, but some of the most common, as well as easily recognizable meanings, are:

There are a lot of different ways of personalizing your moon tattoo, and there is a wide variety of placement options for them too. Tattoo lovers are interested in this tattoo design.